All over Liberty City (GTA IV)
None (GTA V)

Wikipedia has an article on:
Pigeon

“All diseased rats pigeons killed. LC is a cleaner place.”

They were later added to Grand Theft Auto Online as part of the continuation of the The Diamond Casino & Resort update, as one of the possible controllable animals via peyote plants.

There are 200 pigeons located all around Liberty City, in which Niko Bellic must find and either shoot, burn, blow up, or run down with a vehicle. The pigeons are generally found in out-of-the-way areas, but can be easily noticed by the distinctive cooing sound they make and the red glow they're highlighted with (making them easier to spot at night). Killing all 200 Flying Rats adds 2.5% to the game completed percentage and also unlocks an Annihilator helicopter on a helipad near Star Junction in Algonquin.

A continual risk when hunting is discharging a weapon will often trigger a wanted level. The "running over with vehicle" option does not apply to most of the targets, and Niko cannot use his fists or baseball bat to dispatch them. Shooting them from a distance using a sniper rifle is one way to avoid the wanted level.

The in-game website www.whattheydonotwantyoutoknow.com shows the location of the flying rats. Small dots are one flying rat, while large dots represent two or more. On Happiness Island, the large dot represents six flying rats. The map is not particularly useful, especially with multiple targets, except for providing general location.

One Flying Rat is not represented on the website. This one is located on the far west/south-west side of Alderney (the far left island), on a construction site.

Pigeons appear in the enhanced version of Grand Theft Auto V and Grand Theft Auto Online, though no longer as collectibles. Similar to other animals, the player can transform into a pigeon by consuming Peyote Plants in both games.

Location of the 200 flying rats in Liberty City. 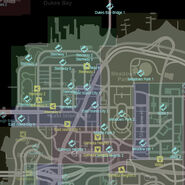 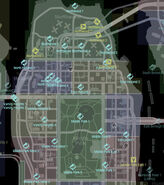 Flying rats in the north of Algonquin

Flying rats in the south of Algonquin

Flying rats in the north of Alderney 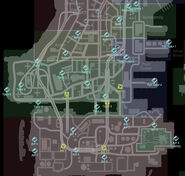 Flying rats in the south of Alderney

Flying rats in the Humboldt river.

Killing all 200 Flying Rats rewards the player with the "Endangered Species" Achievement/Trophy, 2.5% to the 100% Game Completion percentage, and an Annihilator on top of the MeTV building in Star Junction. The helicopter hardly ever spawns if the player uses the window cleaning platform, and has a better chance of it spawning by using a helicopter to reach the top, which is extremely illogical, unless the player is using another kind of helicopter and wants to use the Annihilator.

There are other spawn points for the Annihilator which are easily accessible without the need to kill the Flying Rats, effectively rendering the helicopter as a worthless reward. 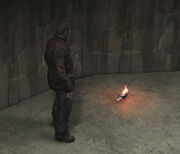 A flying rat in GTA IV.

One of the maps for the location of flying rats in website Whattheydonotwantyoutoknow.com.

Another of the maps for the location of flying rats in website Whattheydonotwantyoutoknow.com.