Floyd: "You've gotta go, both of you. My girlfriend, she'd kill me if she knew I had guests."
Trevor: "Not much of a girlfriend if she don't like your family. Now would you get me a fucking drink? I'm not going to ask you again."
Floyd: "Oh, yeah, yeah. Okay. Wait, I ain't got no booze."
Trevor: "Then you go out and fucking get me something."
—Floyd and Trevor in Friends Reunited

Floyd is the cousin of Wade Hebert. While growing up, he lead an uneventful life and tried to do little wrong, having only stolen a pencil while in elementary school, which he regretted ever since. In 2003, he began working as a unionised longshoreman at Pier 400 at the Port of Los Santos. [1] At some point prior to 2013, he became engaged to a woman named Debra and moved into her apartment in Vespucci Beach, Los Santos, though she would cheat on him with a man named Bob while on business trips.

In 2013, while Debra was on a business trip, Wade and his friend Trevor Philips attempt to track down the latter's former friend, Michael De Santa, knowing that he lives somewhere in Los Santos. Having previously found Floyd's address on the internet, Wade brings Trevor to his cousin's apartment. Trevor barges in and begins ordering Floyd around, who is too shy to stand up for himself. He takes up residence in the apartment, despite Floyd's protests, and eventually trashes it.

Later, Trevor and Wade accompany Floyd to his job at the Port of Los Santos in order to find something to steal. Trevor and Wade disguise themselves as dock workers, and Wade gets pulled aside to deal with a spill. Trevor and Floyd maintain cover moving crates while the former periodically takes photos of a Merryweather Security container ship docked at the port. Eventually, the pair travel to a second dock guarded by Merryweather operatives who tell the pair to leave. Trevor pretends to not know English while Floyd tries to clarify, but the guards begin beating up Floyd, giving Trevor time to grab a briefcase from a guard post. Trevor abandons Floyd who manages to make his way back to his apartment, where he finds Trevor drawing out plans for a heist on one of the walls and Wade sitting on the couch, covered in sewage. Floyd verbally opposes Trevor's plan, but he ignores him and makes Floyd give Wade a bath.

Floyd later helps Trevor steal a Submersible by pulling it out of the water with a crane and tying it to a flatbed truck.

If Trevor chooses the Freighter Approach to The Merryweather Heist, Floyd once again helps Trevor lift the submersible out of the water, this time after Trevor used it to steal an experimental superweapon from the Merryweather cargo ship. However, Trevor's old contact, Lester Crest, arrives shortly after, telling them that it is too dangerous to keep and to put it back. Trevor reluctantly obliges and orders Floyd to return it, with Lester accompanying him.

If Trevor chooses the Offshore Approach, Floyd and Wade deliver a truck carrying the submersible to Trevor's airfield in Sandy Shores.

Afterwards, Trevor is forced to go into hiding after attacking a Mexican crime boss and kidnapping his wife. While Trevor is away, Floyd cleans the apartment and returns it to its prior state, before Trevor and Wade took up residence in it. Debra also returns from her business trip.

After Trevor returns the crime boss's wife and can freely enter Los Santos again, he comes back to the apartment and runs into Floyd leaving. Floyd tries to stop him from entering but Trevor pushes past him and bursts into the apartment, scaring Debra, who demands that he leave. Trevor ignores her and mockingly proposes to Debra and Floyd, sending the former into a rage, who then orders both men to leave and pulls out a gun. Floyd responds by grabbing a kitchen knife and Trevor declares that the couple were "not very fucking nice". Shortly after, Trevor leaves the apartment covered in blood and meets Wade, who came back to say hi. Trevor tricks Wade into thinking that Floyd and Debra had simply left and weren't coming back as they drive to a strip club, where they take up residence instead.

The news later states on the radio that a man was found shot and a woman stabbed to death inside a Vespucci Beach apartment.

Trevor: "Err... we're looking for something to steal."
Floyd: "Sir, I stole a pencil in elementary school and I've been regretting it ever since."
―Floyd to Trevor in Scouting the Port.

Floyd believes in leading an honest and uneventful life, having only ever stolen a pencil in elementary school, and regretting it ever since. He is one of the only characters to abstain from vices such as drugs, violence, adultery, corruption, greed, and materialism, and is very shy when intimidated; seen when he lets Trevor order him around. He often avoids the use of vulgarity, even if he is enraged, as seen in Director Mode, when he can say lines such as "Suck a D" or "A-word". 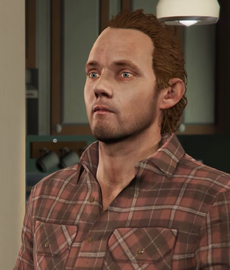 Floyd in the original version of Grand Theft Auto V. 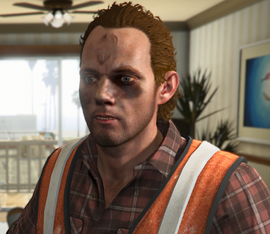 Floyd after taking a beating in Scouting the Port.