Wikipedia has an article on:
Flowers

Flowers are a weapon and a gift featured in Grand Theft Auto: San Andreas.

As the name says, the Flowers are a bunch of pink flowers which can be carried by the player as with any club-based melee weapon.

Since the flowers can be used as a weapon by Carl Johnson, they unrealistically inflict slightly more damage than regular fist fighting. Strangely enough, flowers can easily blow up gas pumps in the gas stations.

Flowers can also be given to Carl's girlfriends as a gift and carrying them in the weapon inventory will cause the sex appeal level to rise. 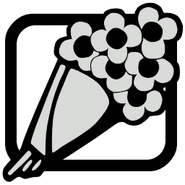 The flowers have a total of 39 locations, being by far the weapon with most spawn points in the game.