Flood in the LS River

Flood in the LS River

•Deliver the meth to Gerald's apartment.

12 initial enemies,
+4 Baller SUVs each with 2 persons on board,
triggered by picking up the meth

“A'ight, so you wanna hustle? This is your hustle - the Lost and the Vagos is having a meeting of minds down in the LS River. It'd suit my purposes if they got stuck up. Light'em up, bring whatever they holding to the crib, you gonna make some bills. Straight up.”

Flood in the LS River is a mission in Grand Theft Auto Online given to the player by Gerald. It is available for up to 4 players.

The Vagos and the Lost are having a drug-dealing meeting over the LS River. Gerald wants that the team to hold everything that the both gangs are keeping (mostly methamphetamine) and bring the drugs back to Gerald. The deal takes place in a construction site near the river. Once all the gangsters are dead, one of the players needs to take the stuff and get back to Gerald's apartment. 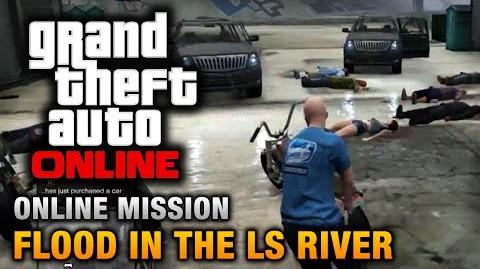