"Fleeca, it's time to start paying"
"Everything, at a price"

"The Fleeca card is the high-interest loan that keeps on giving."
― Description at LCN.com.

Fleeca (pronounced "FLEE-sah") is a banking and credit card company featured across the HD Universe. The player can buy stocks from them on the Lcn-exchange.com website in Grand Theft Auto V.

Fleeca has three radio ads which includes its slogan "Fleeca, it's time to start paying". In the Public Liberty Radio program The Séance, a guest on the show gives her Fleeca card number over the air, whereupon the host, Beatrix Fontaine, says that her card will be "very secure." In TW@ internet cafes and in many other stores in the city, Fleeca credit cards are accepted. There's also a Fleeca company building in The Exchange, Algonquin.

Russian players who pre-ordered GTA IV received a Niko Bellic Fleeca card with his name, serial no., length of validity and date of commission.[1]

Though there are no ads in the radio stations in GTA Chinatown Wars, Fleeca ads can be seen throughout the city, with the same image as in GTA IV.

In GTA V, along with offering credit cards, Fleeca now operates a series of physical banks named Fleeca Bank around San Andreas. These banks are accessible but no cashiers or employees appear inside. The banks are not featured in any missions and the vaults cannot be opened. Its in-game website is www.fleeca.com.

Any money the player picks up takes the form of a stack of $100 bills wrapped in a Fleeca bank strap.

In GTA Online, however, The Fleeca Bank branch in Great Ocean Highway is the main target during the Fleeca Job heist. Lester says that this branch is a good target because it got some bonds guarded in deposit boxes that are being hidden from the taxman, so no one will report missing and also the light security. The crew first scope the bank to take as much information as they can, steal an Armored Kuruma to assist in the getaway, and then the crew steals the deposit box 167 in the finale.

It is possible to glitch into the Fleeca banks using the phone glitch and standing in a certain place. There is a safe, although the player cannot open it with explosives, melee, or bullets, and the door behind the counter is locked so it's not possible to get into that area.

In GTA IV, there is only one branch within Liberty City. In GTA V, however, five branches are located in Los Santos itself while two are outside the city:

The Exchange, Algonquin.
Add a photo to this gallery

Route 68, Harmony, Blaine County.
Add a photo to this gallery

It appears that Fleeca is based on the real world VISA credit card although the logo seems to bear similarities to the real world e-commerce company Neteller.

www.fleeca.com is the official website of the bank in Grand Theft Auto V. Only Franklin can access it, as Michael uses www.maze-bank.com and Trevor www.thebankofliberty.com. 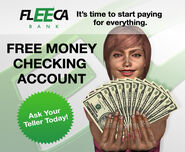 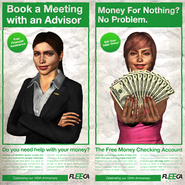 Website, as seen by Franklin.
Add a photo to this gallery
Vehicle sponsors

A Komoda with a Fleeca Race livery in Grand Theft Auto Online. (Rear quarter view)
Add a photo to this gallery

Retrieved from "https://gta.fandom.com/wiki/Fleeca?oldid=1269793"
Community content is available under CC-BY-SA unless otherwise noted.