GTA IV
GTA V
The Flatbed is a recurring heavy truck first introduced in Grand Theft Auto: London 1969 and would go on to repeatedly appear in following titles. It is manufactured by MTL in the HD Universe.

In its debut appearance in Grand Theft Auto: London, 1969, the Flatbed is depicted as a two-door, four-wheel cab-over lorry with a flat cab that is more alike to those seen in 1960s Britain, similar in design to a Ford D-series.

The truck features a set of marker lights and cornet horns on the roof, and an ample bed with what seems to be barrels loaded on it. The truck consistently appears in a green colour.

Between Grand Theft Auto III and Grand Theft Auto: Vice City Stories, the Flatbed's appearance remains the same, being a six-wheeled truck with a long hood/nose, a utility cab with room for two occupants and an ample bed. Although it appears to have six wheels, it can be speculated that it is a 10-wheeler truck, as it would likely have duals.

In Grand Theft Auto IV and Grand Theft Auto: Episodes from Liberty City, the Flatbed is essentially modeled on the Peterbilt 379; its appearance is thus very similar to the Phantom, a truck also based on a Peterbilt design.

The front of the vehicle features a large heavy-duty bumper with the license plate in the center, while the front of the nose is finished in silver/chrome and features a large grille with the MTL badge above. The sides of the nose have large circular fenders for the front wheels and a set of front-facing headlights and side-facing indicators, followed by large badges displaying the truck's name and air cleaners near the cabin area.

The main cabin of the truck is very elevated, featuring a set of side steps and large fuel tanks on the lower sides, as well as cab skirts with additional lights. On the middle section, the truck features the corresponding cabin doors and the silver rear-view mirrors on the doors with small marker lights on the frontal surface, while the upper area features a split windshield with a custom visor on the front and a set of marker lights with trumpet horns on the roof. Large vertical exhaust stacks can be seen behind the cabin.

The rear section of the truck consists of the large flatbed with a front wall separating the cargo area from the cabin section, featuring side access ladders and small mudguards/fenders for the rear wheels, followed by small mudflaps on the end of the rear mudguards/fenders. The rear end has square tail lights on the upper side and a central license plate on the lower side, while the MTL badge can be seen on the rear end of the flatbed/cargo area.

The truck can spawn with an empty bed, an unusable crane or with a large container, and is available in several of a fewer variety of colors, consisting of the primary one applied to the cabin and the rear fenders, and a secondary one for the crane/container extras (only one color set features a darker green primary color with a brighter green secondary). It uses industrial wheels also seen on vehicles such as the Mule, the Benson and the Yankee.

The Flatbed is equipped with a GPS system with a male voice, but only if the player leaves the "selected cars" (default) option in the audio menu.

The Flatbed in Grand Theft Auto: Chinatown Wars resembles a 2009-present Dodge Ram 5500 and is therefore much smaller. It is consistently depicted as a flatbed truck. In other versions, the truck seems to combine elements of the Nintendo DS model and the GTA IV model.

The front section of the vehicle shares the same design as the Packer, but it appears to incorporate silver badges on the grille and beside the cabin area, while the rear section features a long chassis with fuel tanks, additional battery boxes, front mudguards/fenders and rear mudflaps. The rear end of the truck uses a similar tail light setup and rear defense as the Pounder and most of the trailers featured in the game. The rear bed is depicted with small borders on either side and steel winches inside, supposed to carry small vehicles in case of malfunctions or accidents. It's unable to transport vehicles as it is non-operational in-game. Even when using a ramp to get on the bed, the car will still slide off when in motion.

The Flatbed is fitted with a CB radio, and occasional trucker chatter can be heard regardless of whether the main radio is turned on or off. The chatter will only play if playing as Trevor and in Blaine County.

The Flatbed spawns in a variety of single colors applied to the main body, front bumper and rear mudguards/fenders, and it uses a set of industrial wheels also shared with the Benson, the Mule and the Phantom.

Despite its appearance, the Flatbed weighs about the same as normal cars, suggesting that it is a light lorry similar to the Sweets Van. It is also one of the better handling lorries in the game, albeit slightly inferior to the Sweets Van, with average speed, and slightly below average acceleration and handling.

From GTA III onward, the Flatbed is slow to accelerate and hard to maneuver in tight spaces; once it gets going, however, its top speed is decent. The Flatbed is resilient, allowing it to easily ram other vehicles aside (even being capable of surviving up to four collisions before becoming undrivable). However, it is outclassed in this by the Fire Truck and the Barracks OL, but in GTA Vice City, it outperforms the Fire Truck as far as ramming ability is concerned, as it stays in control more than the Fire Truck, whose grip is lost in almost all head-on collisions. Also, in GTA Vice City, it is clearly the heaviest non-specialist vehicle as it is not only a heavy duty ten-wheeler, but it is also always loaded with something. The fire truck accelerates faster but does not demonstrate the amount of momentum and density of the Flatbed.

All renditions of the Flatbed use a diesel engine, coupled to a 5-speed gearbox in a front-engine, rear-wheel-drive layout. It also uses the typical engine sound from most industrial trucks, with the GTA SA iteration using the same sound as the Enforcer and the Barracks.

The Flatbed, despite its size and sheer weight, still manages to get a good top speed. However, it is quite slow to accelerate, but it has exceptional steering and maneuverability to make up for this. The brakes are adequate to its size and weight.

The Flatbed has an engine model, but without the manifolds, the model is hard to identify. It is coupled to a 6-speed gearbox in a front-engine, rear-wheel-drive layout. Its engine sound is shared with that of the Phantom, with a high-revving tone.

The Flatbed in GTA V and GTA Online is an improvement over the last installments. Due to sharing the same engine as the Packer, the Flatbed can achieve speeds just as impressive. Handling is quite decent due to not being that lengthy and the simpler twin-axle setup (opposed to the triple-axle setup of the Packer and the Pounder). Acceleration is not bad either. Another advantage the Flatbed has is its sheer size and weight. When chased by cops, the Flatbed is a rolling battering ram, being able to plough through many roadblocks, also being quite durable.

The Flatbed has an engine model, but without the manifolds found on other trucks, such as the Scrap Truck, the model is hard to identify. Judging by the sparkplug imprints, it can be assumed that the vehicle is petrol, furthermore, eight sparkplug imprints can be seen, meaning the vehicle must have a V8 engine. Despite all this, the engine sound is somewhat similar to a diesel engine, which revs moderately high (yet still lower than other trucks, such as the Benson and Police Riot), and provides a significantly smooth engine sound, yet the roar produced from the engine can still be heard unlike the aforementioned vehicles.

A Flatbed with a crane in Grand Theft Auto IV. (Rear quarter view)

The Flatbed in the Nintendo DS version of Grand Theft Auto: Chinatown Wars.

The Flatbed on the updated Rockstar Games Social Club.

The Flatbed in the cinematic preview on Rockstar Games Social Club. 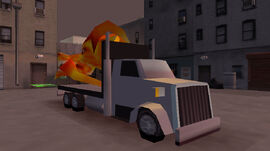 The Flatbed with the dragon costume. 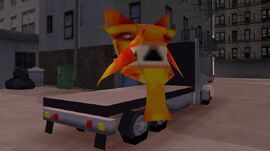 The Flatbed is considered as one of the rarest vehicles in the game, along with Mr. Whoopee and some vehicles. In the mobile version, Flatbeds tend to spawn more frequently, though it is still difficult to find them.