The Flashlight on the Rockstar Games Social Club website.

Wikipedia has an article on:
Flashlight

For the weapon attachment, see Attachments.
“Intensify your fear of the dark with this short range, battery-powered light source. Handy for blunt force trauma.”
— Ammu-Nation and Social Club description.

The Vom Feuer Flashlight is a melee weapon in Grand Theft Auto Online implemented in the Halloween Surprise DLC.

The weapon is an average, cylindrical flashlight that appears to be a shorter Kel-Lite model, mixed with elements of a Lenser M7R Flashlight, without an LED. It comes with a black color and a rugged pattern on the handle.

The Flashlight can be said to be more of a piece of equipment rather than a weapon, as it behaves like a Hammer or a Crowbar when used against enemies. However, one can use the Flashlight to illuminate darker areas and produces a much wider beam, compared to the flashlight attachment available on weapons. Files list the weapon as having greater range than most single-handed clubs (slightly less than the Stun Gun), while in reality, said data is from the light beam and its actual range as a weapon is similar to the aforementioned melee weapons.

Because it is classed as a weapon, the flashlight can be used to intimidate NPCs. 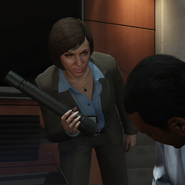 Karen with a flashlight in her hand.

The promotional picture of the Flashlight from the Rockstar Newswire.