Standard White - 100%
“You know how it is. One moment you're driving to the store, the next you've succumbed to an overwhelming desire to tear some fresh holes in the asphalt. Your doctor says you need extensive psychiatric treatment, but at Vapid we understand that all you need is the right car. Specifically, one that's both a nimble little runner and a demented little hatchback that's forever on the edge of tearing itself into hot little pieces. Let the therapy begin.”
— Legendary Motorsport description.

The Flash GT seems to be inspired by the Ford Fiesta RS WRC, as well as the Ford Focus RS RX, with styling cues from the Hyundai RM15 Concept (similar front grille shape and headlights) and the Volkswagen GTI TCR (tail light shape).

The Flash GT features a distinctively large body, modified for rally racing, where the front end features a seemingly linear bumper, followed by a large mesh grille with a red tow hook on the driver side and two small intakes on the outer edges. On the upper area, there are large black housings on the edges that contain large circular headlights on the outer portions and a set of small headlights and turn signals on the inner portions, while the portion above the grille bears the Vapid logo on the centre. Its bonnet features a central intake and a set of hood pins, along with two smaller vents near the windscreen.

On the sides, the fenders and skirts assume a wider profile in comparison to the rest of the car, the former allowing air to flow through each wheel brake, and the latter having a carbon-fibre upper surface. The cabin area has black, plastic-like trim around the windows and on the roof panel, as well as stylised mirror wings near the A-pillars. A small aerial can be seen on the rear portion of the roof.

On the rear section, the car features a small roof spoiler above the rear window and a large spoiler mounted on either side of the trunk. The boot lid features various safety pins on the corners of the rear panel, the number plate on the centre, and the rectangle-shaped tail lights on either side, consisting of upper brake lights, middle main lights and lower reverse/turning lights. The rear bumper features a distinctive formation that exposes a set of rear meshed vents, followed by a diffuser with six blades and two circular exhaust pipes with angled tips. Its underside features carbon-fibre plates covering both ends of the vehicle, with the rear one leaving room for the plastic diffuser. Part of the exhaust pipes are also covered in carbon fibre.

The interior of the car makes use of steel flooring and sport seats with race seatbelts, as well as door pull straps and a roll cage. The Flash GT includes many switches and buttons across the interior, and features a knob reading F/R, likely indicating a rear/four wheel drive locking diff. The steering wheel itself includes multiple buttons and bears the Vapid logo on the horn cap. An RPM indicator can be seen below the digital display, and a large extended gear-shifter is centralised between the racing seats. Also, a radio is seen located under the dashboard.

The primary colour is applied on the bodywork, engine cover, roll cage, and the stitching found on the steering wheel, while the secondary colour is applied on the rear-view mirror wings, roof spoiler, and the large spoiler. A trim colour is also available for the cage paddings and the seats. It uses a set of rims similar to the "Sinthetic Z" sports rims also available in Los Santos Customs, wrapped in low-profile tyres. The rims can also support a dedicated colour, although only naturally-generated examples from Content Creator or the one in the mission Repo - Sasquashed may have one.

The car is above average for the Sports car class. The car has good acceleration and a good amount of grip, making it competitive with some of the low top 10 fastest sports cars around a circuit. However, it lacks in top speed, even when it is fully upgraded. Off-road, it demolishes other rally-esque sports cars. However, it is tricky to handle off-road due to the handling flags.

The vehicle sports a front-engine, four-wheel-drive configuration (20% front, 80% rear distribution), with a 6-speed gearbox and a transversely-laid engine. However, it features no exhaust or inlet manifolds, providing little indication as to its size. It shares the engine sound with the Monroe, the Bifta and the Kuruma. 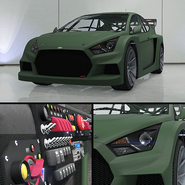 The Flash GT on Legendary Motorsport.

The Flash GT on the updated Rockstar Games Social Club. 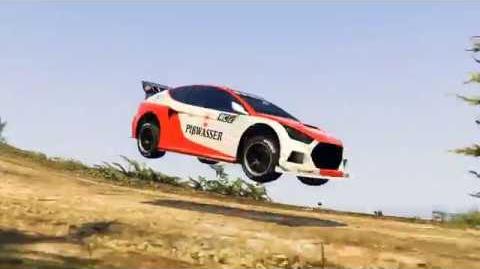 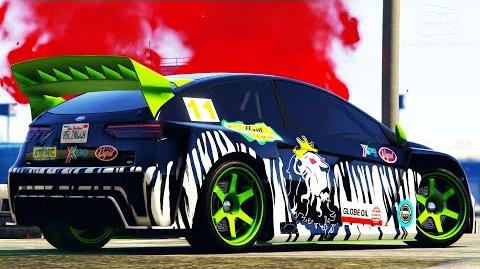