View source
Not to be confused with Flashback FM

Toni and Teri (1984)
Toni (1986)
“Commercials - bad, music - good! Flash FM, now with zero commercials! Please help support Flash FM, send your donation today.”
— Station jingle in GTA Vice City
“The mainstream never popped like it did in the early 1980s.. And there never was a radio host like Toni. She bopped her way into Vice City's heart to the tune of classic songs by Hall & Oates, Laura Branigan and many others.”
— GTA Vice City website
“We hate singing this shit, but our record deal fell through, it's Flash FM!”
— Station jingle in GTA Vice City Stories

The station is hosted by Toni and Teri in 1984, with Toni becoming the sole DJ by 1986 following Teri's departure from the station. It reflects the general atmosphere of the 1980s. The station's idents and imaging voices claim that "if it is totally tubular, rad or awesome" it plays on Flash. Many of the biggest mainstream pop artists in history are in its playlist.

The station's format is reflected in future stations, such as Head Radio, as the station states "we tell you what's good, then play it 'til you like it". One of its imaging jingles claims that it play zero commercials, despite the fact that it is full of them, like all other pop stations.

The station also seems to target a young teen demographic, as it makes comments such as "if you have acne you'll love Flash!", "Now that you've found Flash FM, notice you've suddenly become more popular. Suddenly, everyone wants to hang out with you." and "if no one understands you, we do!"

Flash FM is the one of the favourite radio stations of the Haitians and the Streetwannabes.

The Flash FM CD included in the European release of the 7-CD Grand Theft Auto: Vice City Official Soundtrack Box Set contains three songs that did not actually appear in the game. These are:

Although none of these tracks appeared in Vice City, Toto's "Hold the Line" was later included in the playlist for the classic rock station K-DST in Grand Theft Auto: San Andreas.

The inclusion on the CD of Glenn Frey's "Smuggler's Blues" seems likely to be yet another of the game's nods to the television series Miami Vice, which featured an episode of the same name in its the first season; the episode was in fact named for the song, featured a plot that was heavily inspired by its lyrics, extensively featured the song in the soundtrack, and even featured Glenn Frey himself in the main supporting role. 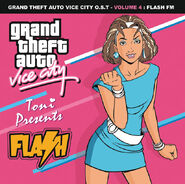