View source
watch 02:56
Raise a Floppa - The Loop
Do you like this video?
Play Sound
For the car in GTA Online, see Flash GT. For the radio station in Vice City, see Flash FM.

2 (driver and a passenger)

The Flash is a compact two-door hatchback in Grand Theft Auto: San Andreas.

The Flash's real life inspirations are the Fourth generation Honda Civic and the Nissan Pulsar GTI-R, albeit lower and wider, and as such is designed as a sporty hatchback. It is one of the smallest and lowest cars in the game.

Like most tuners in the game, the body is weak, making the car susceptible to intense damage from high-speed impacts and heavy gunfire. The Flash has excellent handling due to its front wheel drive, which minimizes spinouts and burnouts, as well as excellent acceleration and speed due to its light weight and powerful engine. The car is considered as one of the best handling cars in the game. Traction and grip are amazing. Its supreme handling makes the car almost impossible to oversteer. These traits make the Flash an ideal car for street racing, especially with a nitro upgrade. It is also useful for evading the police.

The Flash is classified as a tuner, and thus can only be modified at Wheel Arch Angels at Ocean Flats, San Fierro.

Possible combinations of modifications that can be given to Flash's at Wheel Arch Angels in GTA San Andreas. 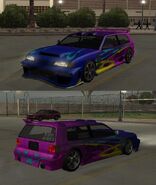 The Flash in the Definitive Edition (front).

The Flash in the Definitive Edition (rear).