Wikipedia has an article on:
Fixed-wing aircraft

Fixed-wing aircraft, also known as aeroplanes (British English) or airplanes (American English), are aircraft that are capable of flight using wings for lift when in motion and propellers or jet engines for thrust.

Fixed-wing aircraft are absent in Grand Theft Auto IV. Some appear in Francis International Airport but cannot be entered. According to Rockstar, the reason for this is due to the map of the city being too small to support fixed-wing aircraft.

Pilotable aircraft return in Grand Theft Auto V, and they range from small private aircraft to large commercial airliners. The re-introduction of the aircraft is to aid the player in travelling around the large State of San Andreas.

Aeroplanes are naturally aircraft that rely on their propellers or jet engines for horizontal speed, generating lift using their wings in the process. Controls while on the ground, however, are often heavy and are only effective at low speeds due to their weight and little traction from the landing gears. As such, aeroplanes often require a stretch of flat surface in order to take off or land, making the presence of airport runways in games they appear in useful in this regard. The only exception to the rule is the Hydra in GTA San Andreas and GTA Online, which is capable of both conventional and vertical take off, flying, and landing by the simple act of adjusting the direction of its jet thrusters.

Since their introduction in GTA III, aeroplanes possess a wide range of controls: Including working ailerons, elevators, and rudders, allowing them to roll, pitch, and yaw, and retractable landing gears in GTA San Andreas and GTA V, which impacts their aerodynamics and speed. In their initial appearances in GTA III and GTA Vice City, certain aerobatic stunts (i.e. barrel rolls or loops) are very difficult to execute (likely because the aeroplanes featured in these games, the Dodo and Skimmer, are underpowered), a limitation rectified in GTA San Andreas, which allows aeroplanes to perform said stunts and are even showcased during Flying School, where a number of aeroplane stunts must be executed by the player.

The size of aeroplanes vary greatly throughout the series, with the Dodo and Stuntplane being the smallest, and the AT-400, Andromada, Jet and Cargo Plane being the largest aeroplanes and aircraft in general. Airplanes in the series have encompassed monoplanes and biplanes, as well as seaplanes.

Due to inherent limitations, the actual controls for aeroplanes are different to real life. The throttle works like the accelerator on a car rather than genuine aeroplane throttles, although there is a limited degree of cruise control. A consequence of this is that, as with other vehicles, aircraft behave much like cars whilst on the ground, and can easily reverse even if they are powered by propellers, which do not have reverse thrust capabilities. In GTA San Andreas, aeroplanes can enter an "autopilot" mode if the player releases the controls, and will continue to fly at a constant speed and altitude.

Initially, aeroplanes in GTA III and GTA Vice City are relatively resistant to damage, capable of hitting solid objects head on at full speed and sustaining only the same amount of damage a road vehicle may have from a similar crash. Like helicopters, aeroplanes will also cease to function outright in water if they do not have pontoons (i.e. the Skimmer).

Damage to aeroplanes was heavily improved in GTA San Andreas, including realism in the damage engine of aeroplanes by allowing certain portions of a plane to malfunction and weaken controls or engine power (indicated by smoke and flapping aeroplane parts) if they lightly hit an object, and having an aircraft explode on impact if flown head on to any solid object or water. Also, planes can catch fire as a result of heavy damage, and, like most other vehicles, this is a sign of the aircraft's imminent destruction, although aeroplanes can sustain fire for a much longer period of time before exploding. Despite these refinements, the models of all aeroplanes still remain generally unchanged despite heavy damage or high-speed collisions (apart from flapping parts).

In GTA Vice City Stories, the last game to feature controllable airplanes before GTA V, damage differed between the two pilotable airplanes: the Skimmer is considerably weak, sometimes destroyed at first impact with any building, while the Biplane might easily stand such impact and suffer almost no damage. None of them have the same semi-realistic degradation like GTA San Andreas did.

In GTA V, airplanes have a much more realistic damage system as it is possible to remove control surfaces and burst aircraft tires, altering their standard stats (acceleration, handling, turning, braking). Much like cars, virtually the entire fuselage of airplanes can be deformed and dented based on the direction and force of the damage.

If a plane sustains damage beyond a certain point, its engine will begin smoking and will degrade in performance capabilities. Continuing to fly the aircraft may lead to total engine failure, and will result in the airplane stalling. For twin-engine aircraft, if one engine fails, then the opposite engine will begin to show signs of heavy damage (such as smoking, sputtering, etc.) and will eventually fail due to over-revving. In addition, wings, horizontal stabilizers and vertical stabilizers can be detached from the airplane after a violent collision or an explosion. Unlike GTA San Andreas, it is possible to belly land with the gear up. 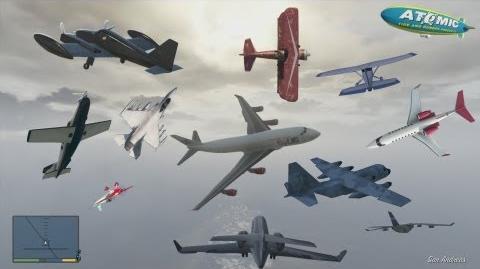