All
“When all else fails, knuckle down and work with what you've got.”

The Fist is a "weapon" available in all Grand Theft Auto games.

The fist represents the unarmed state of the protagonist or playable characters; they will not draw attention in weapons-free zones, and merely locking onto pedestrians or police will not cause a panic or attract a Wanted level.

In Grand Theft Auto, Grand Theft Auto: London games and Grand Theft Auto 2, fists are not fatal. In these games, fists are designed to only knock NPC characters over or used to interrogate them. NPC fists are also non fatal to the player. But using them may still scare away pedestrians or attract police. The player can kill with them if they are used as a pushing mechanic to push people into danger however, but the actual fists do no damage and a fistfight can last forever if one lets it.

In some Grand Theft Auto games, if the player throw punches near someone, there is a chance they might attack them or run away. In Grand Theft Auto: San Andreas, locking into an Ammu-Nation clerk or a restaurant staff member even without any weapons on will instantly cause the clerk to react as if a weapon was aimed at them (In the case of the Ammu-Nation clerk, firing at the player).

The fist remained the same as in 3D Universe, but this time, fighting was made more advanced, and timing elements were introduced into physical combat to allow dodging and melee counters. Usually, locking on a pedestrian will not cause them to react unless a punch is thrown. Depending of the type of pedestrian, they may either run away or will attempt to fight back (where the reticle will change color).

The fist was more elaborated than in previous games and is not only focused into combat, but more interactive for taunting. If the fist is equipped whilst driving a basic vehicle, the player can flip the middle finger and insult pedestrians, which the outcome will vary depending of the pedestrian and the duration of the insult. Pedestrians will likely react to the player's insult pacifically, but the longer they hold insulting, they may react violently, either running away or attempting to take out the player from the car to start a fight. Said feature is also applied to drivers, where they may either drive away recklessly or starting to chase the player.

Naturally, punching is a last-resort in the GTA games, lacking the range of firearms and power of melee weapons. Bare-handed attacks have unique properties - for example, they can be chained, causing the protagonist to unleash a series of various punches and kicks, including a stomp or ground-level kick if an enemy is lying prone, the fists can also prove to be almost stealthy in their abilities. In GTA: San Andreas, Carl Johnson is able to learn more powerful moves by fighting and defeating gym trainers. The skills obtained in the Below the Belt Gym, which are probably the best, can make the fist attacks very powerful. This is because the combo attack of that gym ends with a "super" punch that can kill any person, no matter the amount of health the person has. Grand Theft Auto: Vice City Stories introduced new abilities while fighting, including breaking opponents' necks.

Fist combos can damage and destroy a car. If the player has a maxed-out Muscle in Grand Theft Auto: San Andreas, including the Martial Arts combo, a normal car like the Greenwood can be destroyed in less than twenty-five hits. This also works for some lamp posts that can be broken down with a couple of punches. The fist can be chained as a combo with other melee weapons (except the chainsaw) by using Gym Styles and using the melee weapons upon the third strike and vice versa. This technique usually kills a pedestrian after the combo is completed.

In some games, fists can be reinforced with Brass Knuckles to increase damage.

In Grand Theft Auto IV, the fist is more practical for usage againsts enemies, but was improved over previous iterations. The character not only can make use of punches, but kicks and even headbutts when chained with combos. The character can also push NPCs if used while moving.

As counter-attacks were implemented in the game, the fist can be used immediately after dodging an enemy attack (if timed correctly), resulting in special combos that can deal greater damage or even finishing moves when the enemy is very weak (i.e. uppercuts, spinning kicks and knee attacks). The player is also able to disarm another person who has a Knife or a Baseball Bat and keep it as their own by dodging their attacks, then quickly pressing the attack or counter-attack button. It is also possible to knock or even kill someone out with a single punch to the head (usually right on the scalp), though this is a rare occurrence and is difficult to execute. The same happens with the Baseball Bat (although more easily).

Any sort of punch or kick to a car may damage the car and slightly deform their bodywork, although this will take some time to make effect on them. Helicopters are sensitive to impacts, so a few punches on the main body will produce smoke on the vehicle, at the cost of attracting a wanted level for destroying a vehicle intentionally. One of the basic methods with the fist is to "re-start" a heavily-damaged vehicle, where a few hits in the engine bay of a vehicle that stopped due to multiple crashes will make the vehicle's ignition system work successfully, able to drive them freely to be repaired. However, in the worst case scenario, multiple hits to the engine bay will make the car set aflame in the front area, leading to an explosion (though this may take awhile until the vehicle's rear wheels are set on fire).

In Grand Theft Auto V and Grand Theft Auto Online, the player is able to perform not only punches and kicks, but also slaps to the face and sucker punches to knock the opponent out on the first hit if caught by surprise. While sneaking, the player is also able to deliver a karate chop like movement to the neck to immediately knock the opponent unconscious. Unlike in Grand Theft Auto: Vice City Stories, the player still cannot break opponents' necks from behind. Fist fighting may help in increasing their character skill, as it will boost the general strength of melee attacks. Vehicle damage is applied as well, though, unlike in GTA IV, it is a bit easier because of the vehicle's general sensivity, especially aircraft. 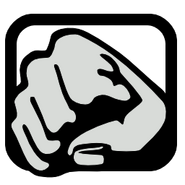