No
“Put the flair back in flare with this firework launcher, guaranteed to raise some oohs and aahs from the crowd.”
— Ammu-Nation and Rockstar Games Social Club description.

It is a limited-time weapon first available in the Independence Day Special and is temporarily available for the Festive Surprise. It was later removed from Ammu-Nation, but would remain in the player's inventory if purchased and could continue to be used until the player's supply of ammunition ran out. Rockstar have advised that it would be made available to players during other special events and holidays in the future.

It also spawns in the player's inventory after Franklin and Lamar in Grand Theft Auto V, but will have a maximum of two rockets.

The Firework Rocket Launcher is designed to look like a cross between the WWII-era Panzerfaust and Panzerschreck, with a skyrocket loaded instead of the standard Anti-Tank Shell.

The weapon appears to be made out of wood, cardboard, PVC-pipe, and random bits of junk. The blast shield is also simply made of a flimsy cardboard, having a drawn on cross-hair and painted over poorly. This reinforces the theme of Independence Day, as it implies rednecks made it. The Freedom Fireworks logo can be seen on the weapon's panel.

The weapon is more of a novelty gadget rather than an actual weapon, as it is primarily purposed for lighting up the Los Santos and Blaine County night sky, though this can yield a wanted level as a result. Firing a firework produces a distinctive high-pitched sound followed by a colorful explosion.

Statistic-wise, the Firework Launcher is inferior to the Rocket Launcher and mounted rocket launchers from armed vehicles. Against NPCs, fireworks are generally weak and cause moderate knockback due to the reduced blast radius, although they are still strong enough to kill a target with a direct hit. Fireworks are not powerful enough to destroy unarmored cars either, but flames resulting from it may eventually destroy the car. The force of the firework launch, however, may be sufficient to push small cars a short distance.

Against players with full health but no Body Armor, the Firework Launcher causes them to lose about half of their health from the explosion, although additional damage will be suffered from the flames if they do not react fast enough. Flames may also expand when used in grassed areas, creating a significant barrier. Suicide shots to the ground also makes the character lose half of their health, along with the fire damage if they do not move quickly.

A picture of a GTA Online player holding a Firework Launcher. 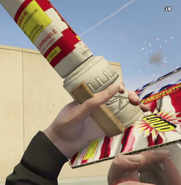