Situated on the corner of Mohegan Avenue and Saponi Avenue, the park is a half-block residential park next to a large block of apartments. At the west side of the park is a seating area decorated with trees, where pedestrians can often be seen talking and hanging out, while at the east side of the park, a playground featuring two swings and an obstacle course with slides and monkey bars looks out onto the corner of Mohegan Avenue.

West view of the park.

The park is perhaps most known for its swing sets being the subject to the infamous "swing set glitch". Being one of the most well-known glitches in the Grand Theft Auto series, the park is one of only several locations where the swing presents the glitch. The glitch itself involves players driving vehicles into the swing, only to be glitched around erratically, and often launched thousands of feet into the air at incredible speeds, often causing vehicles to be heavily deformed after crash landing. The glitch occurs on all platforms and all versions of the game, and certain vehicles are more effective than others due to their body designs.[1] The glitch appears to be caused by an incorrectly placed swing set model which, when disturbed, its own collisions interfere with the map itself, causing unexpected, volatile movement. The object itself is able to be moved and dislodged, but also remain static, causing the resulting conflict. 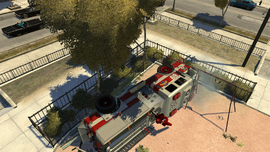 A Fire Truck stuck inside the swing, heavily glitching.
Add a photo to this gallery

Retrieved from "https://gta.fandom.com/wiki/Firefly_Projects_Park?oldid=1135452"
Community content is available under CC-BY-SA unless otherwise noted.