The FDSA appears to be a state-wide service with individual department branches in each major city; Los Santos, San Fierro and Las Venturas.

The stations themselves do not have any prominent use or appearances during missions, however do serve as spawn points for Fire Trucks. There is also a small fire station near the control tower at Easter Bay Airport, San Fierro.

What appears to be an inconsistency is the signage and naming of the stations in each city. The San Fierro Fire Station's signage reads "San Fierro Fire Dept.", indicating it operates its own fire service. Despite this, all fire stations, including the San Fierro branch, utilize FDSA Fire Trucks. The response of individual pedestrian firefighters who bear "LVFD", "LSFD" and "SFFD" markings on their backs further references inconsistency between a state-wide service and individual cities. This is likely a developer oversight.

According to signage, the Las Venturas Fire Station houses the Hazardous Materials Response Team, likely an allusion to HAZMAT services.

Although the San Andreas Fire Department doesn't make any physical appearance in Grand Theft Auto V, "SAFD" is written on yellow fire hydrants across the state. Instead of the SAFD as a state-wide service, Los Santos Fire Department, written also as "Los Santos County Fire Department" serves the counties of Los Santos and Blaine.

The FDSA will respond to any fires ablaze in San Andreas. Two firefighters will arrive at the scene in a Fire Truck and utilize the on-board deck gun to extinguish the fire. After the fire is extinguished, they will leave the scene, but will remain on-call and return to fires if they do not despawn off-scene, in which case more firefighters will respond. Like the San Andreas Emergency Unit, FDSA only respond within San Andreas' major cities; Los Santos, Las Venturas and San Fierro, and will not respond to emergencies in far outskirts, akin to the fact there are no rural fire stations.

The FDSA have stations at each of the three major cities in San Andreas, along with a smaller airport station at the Easter Bay Airport.

All firefighters only appear as males. These pedestrian models are not seen outside fire stations or any other location, and only spawn when responding.

Las Venturas firefighter.
Add a photo to this gallery

The FDSA operate three vehicles. The conventional vehicle for use is the Fire Truck which is used to respond to emergencies and extinguish fires. This truck spawns with identification numbers 16, 47 or 64.[4] A second, much rarer variant of the Fire Truck featuring a ladder is used by the FDSA but only spawns parked outside the San Fierro Fire Station. This variant doesn't have any unit numbers and lacks the water gun, meaning it cannot be used to complete Firefighter side-missions. The third vehicle with FDSA markings is the Raindance. While not being seen used or utilized by the FDSA, it bears FDSA markings as well as the unit number "371" along the side and can be found parked near the Easter Bay Airport Fire Station, but otherwise locked until completion of Learning to Fly. 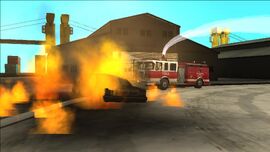 Fire Department of San Andreas firefighters putting out a fire in Los Santos. 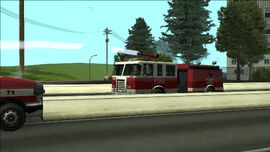 Fire Department of San Andreas firefighters putting out a fire in San Fierro. 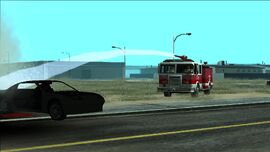 Fire Department of San Andreas firefighters putting out a fire in Las Venturas.
Add a photo to this gallery

Retrieved from "https://gta.fandom.com/wiki/Fire_Department_of_San_Andreas?oldid=1154150"
Community content is available under CC-BY-SA unless otherwise noted.