Like in previous games, the Fire Department of Liberty City (FDLC) operates Fire Trucks in their service, and has several stations throughout Liberty City and Alderney.

Much like the real FDNY, the FDLC also have a medical division named MS Paramedic which oversees medical treatment across the entire city and state. The motto of the FDLC is "Feel The Burn", which can be seen in fire houses as well as on all of the FDLC's apparatus.

The player can call for the FDLC to come to their location by dialing 911, and selecting 3 for Fire Department. Within 30 seconds to 1 minute, a Fire Truck with 4 FDLC fire fighters will arrive at the scene. The members will assume that the call was a "prank" and drive off shortly after arrival.

The FDLC in GTA IV and GTA Chinatown Wars will not respond to emergency situations and do not extinguish nearby fires. One of the only notable times the FDLC will respond to a fire is during the mission "Rigged to Blow".

The FDLC is clearly based on the New York City Fire Department (FDNY), where color schemes of their equipment, uniform and vehicles also resemble those of the FDNY.

The firefighter uniform consists of black turnout gear with yellow and white striping (FDLC lettering on the back) and a black helmet (numbered 69). The turnout gear includes a lantern, while the helmet features a flashlight and door chocks. In addition, some firefighters wear SCBA tanks with a carrying frame. The uniform is entirely cosmetic, as it provides no protection against fire, and the SCBA and accessories are unusable.

The fire chief's uniform consists of a turnout coat with yellow and white striping (CHIEF lettering on the back) over a dress shirt and pants, as well as a white peaked cap. The uniform is entirely cosmetic, as it provides no protection against fire.

FDLC firefighters with a fire "chief" in Grand Theft Auto IV.
Add a photo to this gallery

Both vehicles feature an FDLC livery based on that of the former Fire Department of New York livery used in the 1990s.[3]

While no FDLC emblems or names are apparent on the Ambulance, both the Fire Truck and Ambulance utilize similar colour schemes and stripe patterns, and it is presumed that MS Paramedic serves as a subdivision health service of the FDLC, similar to how the real-life FDNY operate their own health service.

There are 8 fire stations operated by the FDLC in Grand Theft Auto IV. 2 of those are located in Alderney and thus absent from Grand Theft Auto: Chinatown Wars. Some of the fire stations have Fire Trucks outside, and some feature an open interior. At all locations, at least one firefighter will be nearby.

Some of the fire stations appear to replicate real-life FDNY fire stations, particularly those in Algonquin and Broker.

Tudor Fire Station in Tudor, Alderney.
Add a photo to this gallery

An FDLC "chief" in GTA IV, as viewed in a model viewer. 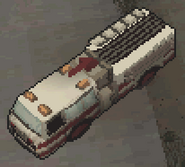 An FDLC Fire Truck responding near Middle Park after the player dials 911.
Add a photo to this gallery

Retrieved from "https://gta.fandom.com/wiki/Fire_Department_of_Liberty_City_(HD_Universe)?oldid=1184967"
Community content is available under CC-BY-SA unless otherwise noted.