Francis: "Let me put it like this... if a guy makes a mistake, should that ruin his life? People don't understand how life is. Life is like a bowl of fruit... slowly rotting in a hot kitchen..."
Niko: "Hey, I don't give a fuck about life lessons, friend. What do you want?"
― Francis McReary and Niko Bellic

Final Interview is a mission in Grand Theft Auto IV given to Niko Bellic by Francis McReary.

Francis explains to Niko that a lawyer, Tom Goldberg, has evidence against him for corruption, which would lead to a court case. Francis wants them back and murder Goldberg, who has hired bodyguards and rides around in limos which make a "normal assault" impossible. Thus, Francis wants Niko to eliminate Goldberg subtly by pretending as a guy applying for a job at the firm by interview.

Niko heads over to a TW@ Internet Café and logs on to a PC. He uses the Internet to find the ad for Goldberg's lawyer firm. The player also can check their e-mail and will find an e-mail from Francis with a direct link to the firm's website. When on the website, the player can spend some time reading Niko's resumé if they wish, then send it to the company. Niko will have the number of the company on his cell phone when he has finished his application. Niko then leaves the internet café, and then must wait for the law firm's response.

Soon the law firm will call to arrange an appointment. Niko buys a nice suit and smart shoes from Perseus or equips one from the wardrobe at any safehouse if the player has bought one already. Strangely enough, the mission won't start if Niko is wearing any headwear at all (which includes glasses, hats and balaclavas). If he missed the interview for some reason, it will be postponed to 6 in-game hours later. An hour or two before the planned interview, Niko heads over to Tom Goldberg's office (indicated on the map by

). He enters without a weapon drawn and attacks no one. He also walks to the receptionist's desk and she will call Goldberg to find out if he's available.

Niko follows the receptionist to Tom's office and a short cutscene plays. After that, Niko listens to Goldberg speak and when the player is ready, Niko stands up. If the player waits too long to stand up, Goldberg eventually will react to Niko's strange, non-responsive attitude by calling security. Niko takes out any weapon and points it at Goldberg.

Pulling out a weapon without pointing it at Goldberg will elicit a variety of reactions from Goldberg, depending on the weapon used, including:

After he tells Niko where the files are, the latter steals them and kills Goldberg.

The player must then leave the building. If the guards are alerted, they will attack the player who will also acquire a wanted level in this case.

Whether the player escapes the building after fighting through guards and cops and loses their wanted level or stealthily kills Goldberg and silently flees the building, they must then take the files to Francis who waits in an alley on Westminster.

"A lawyer, Tom Goldberg, was murdered in his high security Algonquin office today. Mr. Goldberg was believed to be engaged in pursuing corruption charges against high ranking members of the LCPD along with several members of City Hall. Previously, Mr. Goldberg had been involved in cases against the mafia, class action suits against food companies and also won a case against the Strike Lite match company for failing to put a warning on their matches that the product could cause fire if used correctly. In a moment of hubris, he also unsuccessfully sued God for letting it rain on his parade. The killer gained entrance to the offices of Goldberg, Ligner & Shyster, another partner in the firm, eulogized Mr. Goldberg in a press released, "Tom will be sorely missed by all the people he got off. I'll be taking over a lot of his cases, so hopefully I'll get a media profile as big as his and eventually run for political office myself.""

"So-called civil rights activist, Tom Goldberg, was the victim of a gruesome murder facilitated by laws he pushed for as a partner in the law firm Goldberg, Ligner and Shyster. The firm is famous for trying to stand up for so-called civil rights, weak on terror, woolly on immigration and far too Draconian on gun control. Mayor Julio Ochoa's agenda is not giving Liberty City the protection it needs in this climate of anarchy."

"Police say lawyer Tom Goldberg was killed in his Algonquin office today. Officials are investigating all of the recent cases he had been working on to look for leads. He was an activist against the government, the police department and corporate corruption, so suspects are inumerable."

"With the murder of heroic attorney, Tom Goldberg, a blow has been struck to the heart of the first amendment and freedom fighters everywhere. A moment of silence was called in the blogosphere as Mr. Goldberg stood for the freedom of speech and the rights of the little man to slander people anonymously online with no repercussions. He was in favor of immigration and proposed much tighter gun control. No wonder so few conservatives are mourning. He stood up to corporate America and the links between big business and government." 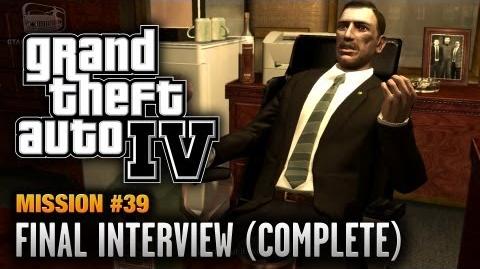