GTA Wiki
Register
Don't have an account?
Sign In
Advertisement
in: Articles with sections under construction, Missions in GTA IV, Missions
English

Do You Have Protection?

No Love Lost
Logging On

Final Destination is a mission in Grand Theft Auto IV given to Niko Bellic by Mikhail Faustin.

Niko meets Mikhail and Dimitri at Perestroika in Broker. Mikhail wants Niko to take Lenny Petrovic, a man he suspects of being a "rat". Dimitri tries to dissuade Mikhail, who doesn't listen. As Niko drives towards Lenny's location in Bohan, Mikhail will call Niko, telling him Lenny is at the Guantanamo Ave. train station. After the call from Mikhail, the player can call Dimitri, and Niko will ask if he should go through with the hit. Dimitri, after disguising the call from Mikhail, says he can't call the order off, despite his disagreement with Mikhail.

This section/page depicts all cutscenes and dialogues in the mission "Final Destination" in Grand Theft Auto IV.

Go to the train platform in Guantanamo Ave in South Bohan. If the player ascends to the platform, Niko will confront Lenny, telling him that Mikhail doesn't like him anymore. Lenny will try to run away, crossing over the train tracks (or if Niko is on the opposite platform, Lenny will exit the station by running down the stairs), while his friend attacks Niko with a Micro SMG. Two Subway cars will always spawn on the tracks and pass the player after Lenny runs off, possibly to prevent the player from killing Lenny on the platform.

If Lenny gets off the platform, he will get in his Banshee and drive away, so the player will have to chase him in a vehicle. Niko can kill Lenny by performing a drive-by on his car or ramming his car off the road.

Another way to kill Lenny without catching his attention is for the player to enter a nearby building and climb to the rooftop. From the rooftop, he will be close enough for a headshot with most weapons, or even the use of Molotov Cocktails. Killing Lenny from a distance will skip the confrontation cutscene.

A third way to kill Lenny without chasing him in a vehicle is to block the stairs to the other platform with a vehicle. When he gets to the bottom of the stairs, he will continuously try to climb over the vehicle, giving the player ample time to kill Lenny. If the stairs are blocked perfectly by literally driving into the tunnel, he may even turn around and run back up to the platform.

An alternative way to kill Lenny is to keep chasing him until his car catches fire and explodes (this can be sped up if he crashes into a gas station). It will not be included in Niko's "kill" statistics and there will be no unique dialogue at the end of the mission.

If Lenny makes it to his father's home in Hove Beach, the mission will fail and he will run inside. 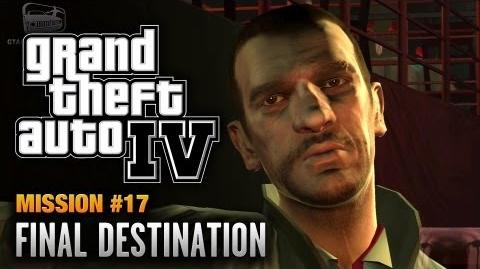