View source
watch 02:52
Roblox: DeepWoken - The Loop
Do you like this video?
Play Sound
For other uses, see Festive Surprise (disambiguation).

Festive Surprise 2015 is a content update for Grand Theft Auto Online, released through a minor patch on December 21, 2015.

Festive Surprise 2015 marks the 3rd year of the Festive period, which started off in 2013 with the Holiday Gifts event, returns in 2014 and 2015 as a content update and later appears as an Event in 2016 named the Festive Surprise 2016 Event. It is the third year that Snowfall makes an occurrence in GTA Online.

This update re-released all clothing items released in Holiday Gifts and the original Festive Surprise update along with snow. One new vehicle, the Tampa, has been added, and is permanently available even after the events expire. Three new loop horns were added to Los Santos Customs. Christmas trees were re-added to apartments, as well as a large one in Legion Square, and the new Stilt Apartments and Yachts also had one added to their interiors. A new Adversary Mode, Beast vs Slasher, is available, and is also available permanently.

Screenshot of four players at Legion Square, featuring a Tampa in the background.

The Tampa in another screenshot.

The "Beast vs Slasher" adversary mode.

A Christmas Tree present in the Online Protagonist's apartment. 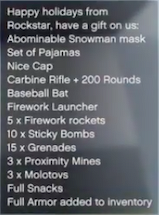 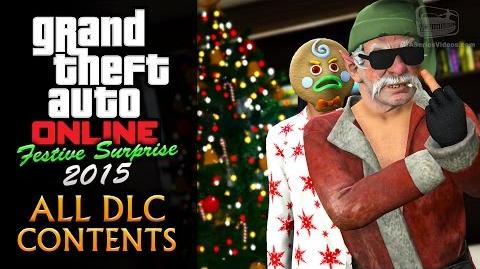 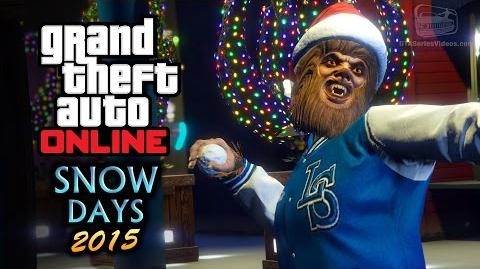