Festive Surprise marks the second celebration of Christmas. It continues every year under the same name, succeeded by Festive Surprise 2015, another DLC with additional content, and Festive Surprise 2016 and 2017, events which re-released existing content from all previous years and released new content hidden in the game files of previous updates.

The update features all of the content from the Holiday Gifts update, along with new Christmas-themed content. Four new vehicles have been added, including the Vapid Slamvan, Rat-Truck, Massacro (Racecar), and Jester (Racecar). Over ninety new festive clothing options and two new weapons, the Homing Launcher and Proximity Mines, are available. These are free, but available for a limited time while vehicles and the new weapons remain permanently available for purchase. Christmas trees have been added to all apartments. Also, thirty new tattoos are purchasable at all Tattoo Parlors. Snow also returned the game for a limited time.

Special crate drops will also be dropping unlimited copies of the past events each day. Each day a new unique item and after that 24 hour they will be unobtainable. This includes, beer hats and many limited edition T-Shirts. The GTA: Online servers run on a GMT timezone so it is important to know when the servers update to the next special item.

(Due to the PSN and Xbox LIVE being hacked by the Lizard Squad, many players were left unable to obtain special crate drops. Rockstar extended crate drops for the days in which connection issues were numerous.)

“Players who log in on either the 24th December, 31st December, or the 1st January will be gifted a Firework Launcher with five rounds. The launcher will be permanently added to the player’s inventory. Players who already own the launcher will receive 5 rounds when logging in on each of the above days. The Christmas Day Gift will be available only to players who log in to play GTA Online on 25th Please note that this is only available from the Christmas Day Gift and cannot be purchased.”
— Rockstar patch notes

The Christmas Gift comprised of:

The Christmas Tree in Legion Square

The Christmas Tree in all apartments 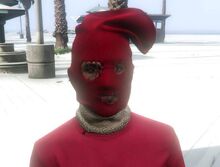 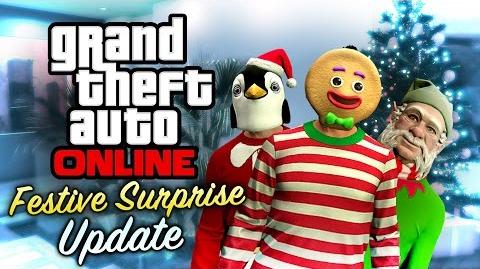