Standard White - 100%
“Sure, there are voices in the back of your mind right now whispering "this is a ludicrous idea". But you know what? As soon as you nervously tune into WorldWide FM and instantly shatter every window in a ten block radius, you're never going to hear those voices, or anything else, ever again.”

The Vapid Festival Bus is a Burning Man Festival bus featured in Grand Theft Auto Online as part of the After Hours update.

The Festival Bus is a civilian version of the Prison Bus made into a festival/stage bus. The Festival Bus resembles the Robot Heart Burning Man festival bus, featuring neon lights, large speakers attached to the left of the bus and on the stage roof, and a large neon skull sculpture. The front of the stage features an animated panel with colorful decorations. The stage itself is wider and longer than the bus itself, and so is held on securely by several large supports which attach to the bus' bodywork.

While seemingly identical to its prison counterpart, the vehicle lacks the frames on its side windows, as well as the extra lights on the upper side. The bus itself no longer sports the Bolingbroke Penitentiary livery and instead allows the player to choose from 10 different festival-themed liveries.

When the player uses the horn, it will instead activate the neons, as well as the DJ turntable on top. When activated, it also allows the driver to exit the vehicle without turning the engine off, which will also prevent the vehicle’s radio from cutting off, thus allowing music to play.

While the Festival Bus has near-identical performance to the Prison Bus, one of the key benefits is that it doesn't tip over as easily compared to the Prison Bus, though its acceleration has lowered due to the DJ equipment and speakers being added to the vehicle. Furthermore, because of the additional features added to the bus, it can be problematic when attempting to drive underneath lower bridges and tunnels that are too low for it to go through.

It can be noted that the stage accessories, including the sculpture and speakers, can be detached in collision. These parts exceed the height of most street lights and traffic lights around Los Santos, making it relatively difficult to avoid them. They also narrowly miss some overpasses, particularly along the La Puerta Freeway.

Although it has the same capacity as its prison counterpart, additional players can stand on the stage roof without the risk of falling.

The bus cannot be modified as it is a Pegasus vehicle, however the player can choose from 10 different liveries:

The Festival Bus on the updated Rockstar Games Social Club.

The Festival Bus in the cinematic preview on Rockstar Games Social Club.

A full view of the Festival Bus. (Rear quarter view) 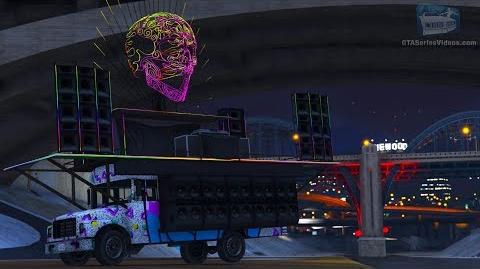