The FIB and the IAA are involved in a bureaucratic fight over which agency will receive more government funding. The IAA captures Mr. K and fakes his death to "remove him from the record", then extradites him for torture. Under the orders of Steve Haines, Michael De Santa and Trevor Philips rescue him from the IAA in the midst of a torture session, but only to remove him to another warehouse. Mr. K is tortured, this time by Trevor under Steve's supervision, until he gives them enough information on a target for Michael to assassinate the target with a sniper rifle.

Afterwards, Steve gives Trevor the order to kill Mr. K. Trevor decides instead to let Mr. K live solely because he doesn't like taking orders from government types. He drives Mr. K to the airport, ignores his complains about his poor health and wanting to see his family again he tells him to fly out of the country. Once dropped off at the Airport, Mr.K attempts to run away and eventually stumbles down a flight of stairs. As his body isn't seen after the mission's over, his ultimate fate is unknown.

Mr. K was allegedly a terrorist or at least involved in terrorism in some form, but it is at least implied that he and the man Michael shot were simply scapegoats.

Ferdinand getting tortured by Trevor 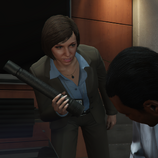 Ferdinand getting interrogated by Karen.
Add a photo to this gallery
Retrieved from "https://gta.fandom.com/wiki/Ferdinand_Kerimov?oldid=498374"
Community content is available under CC-BY-SA unless otherwise noted.