Kerimov was born in Azerbaijan but later moved to Morningwood, Los Santos, with his family. He looks to be around his mid to late thirties or early forties and wears what appears to be a holy cross around his neck.

He works as a home theater technician, as evidenced by his refutations of being a "terrorist" and admitting he's installed cinema equipment for alleged terrorist Tahir Javan.

During 2013, both the FIB and the IAA are involved in a bureaucratic fight over which agency will receive more government funding. The IAA captures Kerimov and fakes his death to "remove him from the record", then extradites him for torture. Under the orders of Steve Haines, Michael De Santa, Franklin Clinton and Trevor Philips rescue him from the IAA in the midst of a torture session led by Karen Daniels in the IAA headquarters, but only to remove him to another warehouse. Kerimov is brutally tortured, this time by Trevor under Steve's supervision, until he gives them enough information so that Michael and Dave Norton can locate and kill Tahir Javan. He is tortured to the point where he cries and is mentally broken. According to Kerimov, he has been held by the FIB and IAA for six weeks.

Afterwards, Steve gives Trevor the order to kill Kerimov, claiming that he is no longer useful. Trevor decides instead to let Kerimov live however, because, ironically, he doesn't like taking orders from government types, and also because he must "deliver a message". He drives Kerimov to the airport, ignoring his complaints about his poor health and wanting to see his family again, and tells him to fly out of the country. Once dropped off at the airport, Kerimov attempts to run away, but eventually stumbles down a flight of stairs into the airport. He is never seen nor mentioned again after this.

Ferdinand getting tortured by Trevor 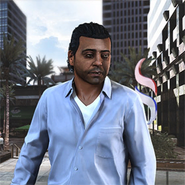 Ferdinand Kerimov's photo seen in the mission Dead Man Walking.
Add a photo to this gallery

Retrieved from "https://gta.fandom.com/wiki/Ferdinand_Kerimov?oldid=1200373"
Community content is available under CC-BY-SA unless otherwise noted.