Carl Johnson about to drive the car, with Johnny Sindacco tied on the hood

• ­Scare him, but remember head-on collisions will kill him.

• ­And stay off the highway, you don't need any police attention.

• ­Take him back to the casino.

"You know what? I think we're gonna take a little drive."
— Carl Johnson

Fender Ketchup is a mission in Grand Theft Auto: San Andreas given to protagonist Carl Johnson by San Fierro Triads leader Wu Zi Mu from his office at The Four Dragons Casino, a casino located along The Strip in Las Venturas, San Andreas.

Carl pays a visit to Woozie, after inviting him to this new place. Woozie explains to him the problems he's having about the casino business. Apparently, either one of the three mafia families in the city - the Leone Family, the Forelli Family and the Sindacco Family - are causing the trouble for him, and would do anything to keep them away. Woozie then offers a deal to Carl; in exchange for some help with the casino business, Woozie would offer Carl a share of the casino. Carl gladly agrees.

A little later, a Triad comes in, saying that some thugs have been interrupting things, and that one of the thugs was caught. Woozie orders him to get rid of the thug, but Carl has a better idea. He orders the Triad to tie him up on the windscreen of a Feltzer, and he would deal with this a little later.

Soon enough, Carl goes to the garage and finds the thug already tied up to the windscreen of the car. Carl leaves the garage and drives frantically around town in order scare the thug into revealing which family he belongs to. The thug eventually reveals that he is from the Sindacco Family, and Carl says that's all he wanted to hear, leaving the thug horrified at having spilled the beans to Carl as to who is giving the Triads so much trouble. He then goes back to the casino.

The rewards for this mission are $5,000 and an increase in respect. The mission Explosive Situation is unlocked.

During the cutscene where CJ is in the garage and enters the Feltzer to drive it out, sometimes the garage door will not open properly and the vehicle will become stuck inside the garage during the cutscene, and it can be observed crashing repeatedly into the door and the walls on the inside of the garage as the camera remains in a fixed position. However, pressing the "Sprint" key after a measure of time will skip this cutscene and allow the vehicle to exit the garage. The player can also turn the Frame Limiter ON to solve this problem. 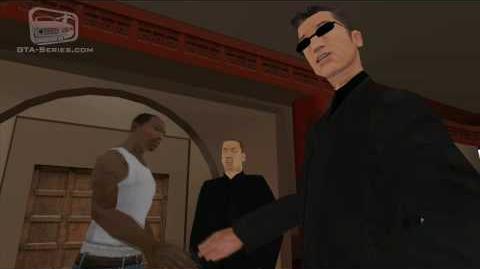 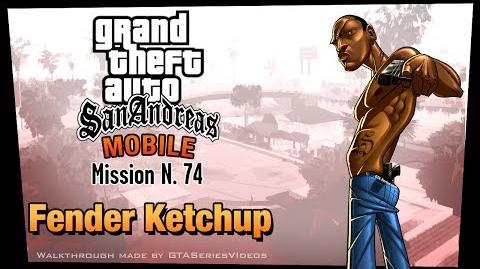 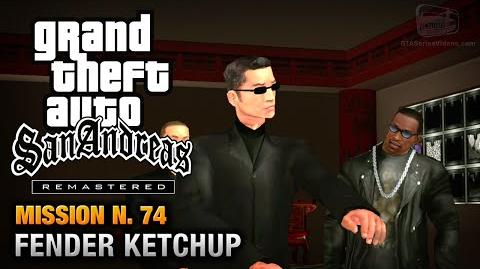 Retrieved from "https://gta.fandom.com/wiki/Fender_Ketchup?oldid=1316948"
Community content is available under CC-BY-SA unless otherwise noted.