Standard White - 100%
“This entry-level luxury car is for entry-level type guys - salesmen, marketing dorks, people at tech companies who want to feel like they've made it but they never really will. Show people what kind of man you want to be.”
— Legendary Motorsport description.

In Grand Theft Auto: San Andreas, the Feltzer is depicted as a compact German-style late 1980's luxury convertible, based on the Mercedes-Benz SL (R107) (most likely the 380SL). The car also appears to bear a few elements with typical American classic sports cars, giving it some muscle car-like traits.

The design of the car is very traditional, with a boxy bodywork, square lamps and a rectangular grille. The Feltzer always spawns in its convertible form and can carry two occupants. It is only seen in a variety of single colours.

The Feltzer retains the two-door layout and generally small body from its previous iteration, but features a more areodynamic styling. The front of the car is quite dominated by the front bumper, having a central intake and two smaller ones next to it. The upper area is occupied by the grille and the silver headlamp housings, each one having an inner lamp, a larger outer lamp and a much smaller turn signal between. The bonnet follows the sloped profile and has elevated portions on the centre.

The sides feature flared wheel arches, medium-sized skirts and vertical chrome handles. The cabin area is distinctive by the black trim and coloured rear-view mirrors. Silver badges can be seen on the front fenders.

The rear assumes a more concave profile, with a boot lip, flat plate holder and large tail lamps. The rear bumper has a central vent and two slots for the square-shaped exhausts. Again, silver badges can be seen on the boot.

Feltzers may be seen with a folding hardtop (like the real life SLK), a soft-top, or with the top down. Some are equipped with a badgeless black mesh grille, while others feature a standard three-bar grille with a Benefactor emblem. The vehicle is only available in single colours. It uses a unique set of six-spoke rims wrapped in low-profile tyres.

The Feltzer is equipped with a GPS system with a female voice, but only if the player leaves the "selected cars" (default) option in the audio menu.

“It takes a certain type of special person to be able to handle a car like this. A trend-setter, an individual, a winner. The kind of risk-taker who goes after what they want without getting bogged down in the small print. Are you that person? Come to my showroom in Pillbox Hill and I will make you believe that you are. This car is HOT! It won’t last long at these highly competitive interest rates.”
— Simeon Yetarian

The Feltzer returns in Grand Theft Auto V and Grand Theft Auto Online, this time depicted as a customized sports car resembling the SL 65 AMG Black Series. The "GT Wing" modification gives the car a spoiler identical to that of the race version of the Mercedes-Benz CLK DTM, while the "Low Level Spoiler" option resembles the street version.

The Feltzer assumes a similar design to that of the GTA IV iteration, but appears to be more customized, with a wide body kit, sports bonnet, carbon-fibre parts, larger wheels, side exit exhausts. The headlights seem to be the only other change, looking quite similar to the Rebla's. Silver badgings can be seen on the boot and the rear fenders.

The car is only painted with a single color, which also affects the stitching on the interior. The rim design is shared with the Fusilade and the Sentinel, being identical to the "Organic Type D" sport wheels available in Los Santos Customs.

The Feltzer in GTA San Andreas has a good top speed, but its handling is rather unsatisfactory, as its light weight acts against it. It also has rather slow acceleration. Durability is average, making it take several hits before catching fire.

The GTA IV rendition of the Feltzer is powered by what sounds to be a small-displacement V8 engine coupled to a 5-speed semi-automatic gearbox in FR configuration. The Auto Eroticarwebsite states that the engine is a 3.8L Supercharged V8. The Feltzer has a top speed of around 85 to 90 mph, but is the slowest of the sports cars, even slower than the more compact Sentinel XS. Acceleration is decent, yet strong enough to easily break traction on the rear wheels when punched.

The Feltzer has developed a reputation for being one of the best drifting cars in the game, due to the high level of torque generated by the supercharger. The suspension is firm and responsive, keeping the Feltzer level in the corners, albeit with some fishtailing at high speeds. These qualities provide an accurate representation of the unforgiving nature the Mercedes coupes provide. Braking is good, and ABS is an available option, though not standard. The Feltzer withstands high-speed frontal crashes well, thanks to its luxury build, and can sustain numerous frontal hits without failing or catching fire. The car can not withstand gunfire very well, however, and also leaves the player highly vulnerable if the player is driving with the top down.

The GTA V rendition is powered by a high-revving 6.0L supercharged V8 engine, according to the website. The engine cover appears to be a V8, which is coupled to a 6-speed gearbox in a front engine, rear wheel drive layout. It shares its engine sound with the Carbonizzare.

The car accelerates quickly with a higher top speed than the GTA IV variant and that makes the car dangerous, as the player is more prone to be ejected from the windshield. Compared to the other sports cars, it has a lower top speed, average acceleration, poorer braking, but higher traction. It is often regarded as one of the best drifting cars in the game due to it being back heavy, having a responsive suspension, and being easier to control. Its back-heavy distribution makes it slide out of control when cornering, however.

Front view of a Feltzer with hard top and badged grille.

Rear view of a Feltzer with soft top.

Billboard advertisement of the Feltzer in GTA IV.

A tuned Feltzer in GTA V.

Screenshot of a Feltzer after being customized at Los Santos Customs.

The LSPD giving chase to a customized Feltzer.

A 360° view of the Feltzer on the GTA V Official Website. 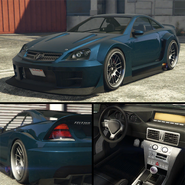 The Feltzer on the updated Rockstar Games Social Club.

The Feltzer in the cinematic preview on GTA V Rockstar Games Social Club.

The Feltzer in the cinematic preview on GTA Online Rockstar Games Social Club.

This unique Feltzer is one of five vehicles in GTA IV referred to by name, the others being the "shitty beige Willard" from "It's Your Call", the "silver Blista" taken in "Clean Getaway", the Patriot from "The Puerto Rican Connection", and the Romero used in "Undertaker."

3 heavily modified variants of the Feltzer may appear in Vehicle Cargo source missions. Each variant has a unique license plate number, colour combination and different set of bodywork modifications.

The Feltzer is part of the vehiclemodelset "LS_CUSTOMS_MODDED_SP". This allows heavily modified Feltzers, among many other modified cars to spawn outside Los Santos Customs, as well at other locations. They only spawn in GTA V.