GTA Wiki
Register
Don't have an account?
Sign In
Advertisement
in: Vehicles, Vehicles in GTA V, Vehicles manufactured by Lampadati,
and 5 more
English

Yes
“The GT is a 2-door convertible variant of the standard Felon because nothing puts the damper on a midlife crisis quicker than a pair of screaming kids in the back seat.”
— Southern San Andreas Super Autos description.

As with its coupe counterpart, the Felon GT is mostly inspired by the 2010-present Maserati GranCabrio and Jaguar XF such as the front and rear fascia and the the greenhouse area. The front and rear windscreens are mostly inspired by the Maserati GranCabrio. The car uses the Swedish styling of the second generation Saab 9-5 and the British styling seen on the headlamps of the car and Jaguar XFR for the front end. The styling has resulted in a convertible version of the Felon.

The sides of this car share many design features with the Felon. The main body is smooth and elegant, with the only extra formation being a tall, thin air duct behind the front wheel arch. The wheel arches are flared, providing a more muscular appearance. The main body lines are smooth and curvy, illustrating the luxurious intent of the car's design. The car features doors with frameless windows and the wing mirrors are mounted just behind the base of the A-pillar. A black vinyl roof can be raised to complete the car's form. Chrome door handles are also present to enhance the luxurious theme of the car's design. The car features similar eight spoke wheels as its stable-mate; the Felon GT having trident formations at the outer end of the spokes, wrapped in low-profile tires.

The rear fascia of the car is nearly identical to the Felon; featuring rear lamp units that are dominantly red, which partly have the horizontal chrome trim inset, with the reverse lamp area adjacent, creating a formation that spans most of the car's width and is parallel to the rear lights at its outer ends. The horizontal trim also forms the top edge for the impressed license plate area. Beneath these there is a rear bumper that protrudes from the main body in two levels, with the lower half having more elevation. The base of the bumper features a sharp ledge that bounds a polymer covered area which spans the entire width and houses two twin-oval exhaust tips at either edge.

The vehicle is painted with a single primary colour, but unlike the standard Felon, the interior stitching will be coloured as well. It uses a set of wheels similar to the "LozSpeed Baller" SUV wheels available in Los Santos Customs, although the rims themselves do not have a concave form on the centre. Instead, they remain flat.

The Felon GT has similar performance to its hardtop variant, with good acceleration from a standstill and a high top speed. Handling is no different from the normal Felon either, which is unusual as convertible versions of hardtop cars are usually the opposite of this, implying that it is of high build quality. Since the Felon GT loses the ability to carry three passengers, it is less viable in Online as a group getaway car, but is otherwise a good choice for a fast vehicle.

A Felon GT with the roof down. (Rear quarter view) 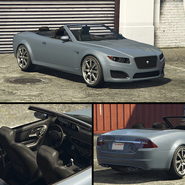 The Felon GT on the updated Rockstar Games Social Club.