Yes
“An Italian luxury car company founded in Bologna at the beginning of the 20th Century that focused on racing cars. Having failed to win many Grand Prix, they focused on making sports cars that impress vapid women. They've done this exceptionally well.”
— Southern San Andreas Super Autos description.

The Felon is inspired by the fifth generation Maserati Quattroporte, as seen by its overall design, greenhouse area and side profile. Some of its details are inspired by the Jaguar XF, such as a XF-R front fascia, large thin vertical wheel vents, front and rear lights, and rear chrome. The Felon's features also take cues from the second generation Saab 9-5, as seen on the front end. The car's taillights have a resemblance to the Tesla Model S.

The front bumper features three intakes with the central intake being the least tall of the three, occupying half the width of the front bumper. To either side of this intake, there are two taller, chrome-trimmed intakes, with upper edges that are parallel to the lower edge of the headlamp units. Above the central intake there is a large, chrome-trimmed main grille with a curved lower edge and straight top edge, with a manufacturer emblem inset. Beginning from half the grille height there are chrome-edged headlamp units with a curved lower edge and a flat top edge. These headlamp units feature two circular lamps closest to the center, and a turn indicator lamp, furthest on the outside. The car features a long bonnet/hood with two levels of elevation. The first signified by the line from the corner of the grille to its respective corner of the windscreen. The second level of elevation is inset centrally on the first.

The sides are formed mainly from a range of smooth, elegant curves. The wheel arches are flared, creating a more muscular appearance. Behind the long front quarter area the main body is smooth, with the only extra formation being a tall, thin duct behind the front wheel arch. The greenhouse area features small body-coloured wing mirrors (mounted on the window area, near the base of the A-pillars, chrome-trimmed windows and door handles. The B-pillars are neither chrome-trimmed nor body coloured. The rear wheel arch features a more prominent bulge than the front. Above, a long, elegant C-pillar can be seen, clearly illustrating the luxurious element of the car's design. By default the car features eight-spoke wheels with split edges connecting the spokes to the lip of the wheel. The wheels are wrapped in low-profile tyres.

The rear of the car draws on more XFR design elements and features rear lamp units that are dominantly red, which partly have the horizontal chrome trim inset. The horizontal trim also forms the top edge for the impressed license plate area. Beneath these there is a rear bumper that protrudes from the main body in two levels, with the lower half having more elevation. The base of the bumper features a polymer covered area which spans the entire width and houses quad exhaust tips.

The vehicle is painted in a single primary colour for the body. It uses a unique set of wheels with 8-spoke rims, with smaller split ends.

On the surface, especially to inexperienced drivers, the Felon appears to have mediocre performance. It has average acceleration, which is partially let down by its heavy weight, and its front engine, rear wheel drive layout. The engine sounds to be a flat-plane engine, which sounds rather low-revving and does not provide enough power for above-average acceleration. Its top speed also proves to be nothing spectacular, being average at best when compared to most other cars of its velocity, and especially those in its class.

On the plus side, the vehicle has excellent durability. Wheel camber is rare and, if it occurs, occurs to a minimal extent. The engine is well protected against gun-fire from other players, and is an-all round tough vehicle for head on crashes and vehicular combat. Rolling the vehicle does little deformation in the pillars thanks to rather firm A, B and C pillars, particularly the latter.

Braking is another good side. While the car is rather heavy, it appears to have large disk brakes and the car can come to a halt almost immediately, and still impressively quick from high speeds. In terms of handling, the car has impressive grip, partly stemming from the vehicle's weight, and an impressive turning radius for a car with a lengthy wheelbase. This is also helped by the more than satisfactory amount of speed the vehicle can potentially retain even through sharp corners in the city, rivaling that of the Zion and Zion Cabrio.

Overall, in the hands of a good driver and especially when fully upgraded, the Felon can prove to be especially competitive in its class, especially when directly compared with the Exemplar and Jackal. Its average acceleration and top speed are more than made up for in its handling characteristics. In offensive situations, its effectiveness is also bolstered by its durability and seating capacity.

The purple Felon during the mission Hood Safari, seen in the "First Person Experience" Trailer. 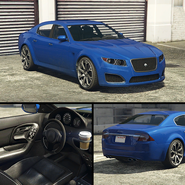 The Felon on the updated Rockstar Games Social Club.

The Felon in the cinematic preview on Rockstar Games Social Club.

A Felon used by the Ballas during gang attacks. It will always spawn in a dark purple color.