Wikipedia has an article on:
Federal Bureau of Investigation

The Federal Bureau of Investigation (FBI) is an Agency in the 3D Universe of the Grand Theft Auto series.

The FBI is the third level of law enforcement that pursues the player. The FBI will only appear when the player's wanted level reaches five stars, before the Army on six stars.

FBI Agents wear blue jackets with "FBI" printed on the back in nearly all of the 3D Universe games (excluding GTA Liberty City Stories). In Grand Theft Auto: Vice City Stories, they wear black vests over differently colored t-shirts with "FBI" printed on the back with dark glasses and caps. The FBI agents are well armed in all appearances, and their vehicles are generally extremely fast. The FBI comes with four agents in each car, and since they are well armed and very accurate, they will kill the player extremely quickly if they have an open range. They carry MP5s in all of the 3D Universe games, except for Grand Theft Auto III, where this weapon is unavailable, and instead they carry AK-47s and pistols (when killed or encountered in a roadblock).

In GTA III and GTA Liberty City Stories, their headquarters is located in Torrington, Staunton Island, Liberty City. Strangely, in both games, there are no FBI vehicles near this building. 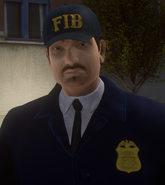 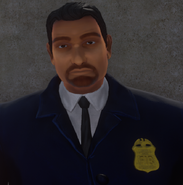 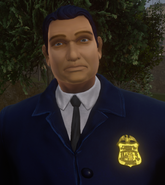 The incorrect use of the HD Universe "FIB" logo in the Definitive Edition.

In Grand Theft Auto: San Andreas, during the mission Badlands.

Rancher (Martha's Mug Shot only, used by FBI agents to block the entrances to the Movie Studios, not driven by FBI)