"So, you rocked up uninvited to a secluded farmhouse in the middle of Blaine County. What did you think was going to happen?"
―Description

Farmhouse Survival is a Survival job in Grand Theft Auto Online as part of the continuation of the The Diamond Casino & Resort update, released on September 26, 2019, during the Survival Series Week event. It takes place at the O'Neil Ranch in Grapeseed.

The enemies are the O'Neil Brothers. Their vehicles of choice to arrive in during later waves are the Dune Buggy and Injection, with them also using Froggers on certain waves.

The players start in front of the ranch. They are then free to find adequate location to survive the waves. There is a health pack located outside both of the entrances to the building. Two armour pickups are also available inside.

Many props, such as trailers and wooden boxes, are scattered around the farm, which can be used for cover.

Health pack at the southeast entrance to the house.

Health pack at the northwest entrance to the house.

Armour pack near the staircase.

Second armour pack inside the house.

Overview of the map.

Players can take cover to the right of the doorway, where they can also shoot enemies out the window.

Players can take cover at the top of the staircase. 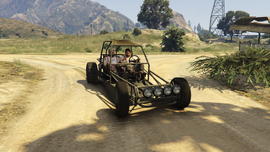 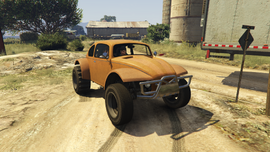 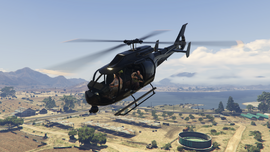 Retrieved from "https://gta.fandom.com/wiki/Farmhouse_Survival?oldid=1189991"
Community content is available under CC-BY-SA unless otherwise noted.