Díaz: "Vic! I was just talking to my new friend, Gonzalez, about loyalty! How I will look after him so long as he does what he's told...And you will do what you're told, won't you?!"
Gonzalez: "Si, si."
Díaz: "Bueno. Escort him to the airport, Vic. Show him what it means to be a friend of Ricardo Diaz... and what it means to be an enemy."
—Ricardo Diaz blackmails Gonzalez into working for him

Gonzalez has been caught by Ricardo Diaz and is wanted to work for Diaz as well as leaking him information for any shipments he knows about. He needs to get his Colonel's merchandise to the airport in safety but the Sharks are attacking his truck. Victor gets in an Armadillo while being flown by another Diaz goon and handed a M249. He escorts the truck and shoots all the attacking Sharks. When Gonzalez makes it to the airport, his goons block the entrances but more Sharks attack and as Victor clears out one of the entrances, the other one is under attack. After all the attackers are killed, Gonzalez escapes with a plane even more Sharks in Gang Ranchers attempt to attack him. Once the plane takes off the mission is completed and Victor is dropped off at the helipad at the Escobar International Airport.

The reward for completing this mission is $2,500 and the mission Burning Bridges is unlocked. The Minigun is also available for purchase from Ammu-Nation. 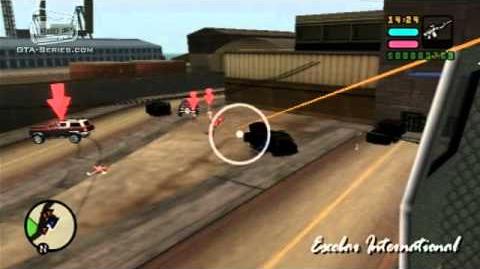