View source
For the television program, see Fame or Shame.

Trevor as a contact for Michael
Lazlow Jones and Fabien LaRouche as Director Mode characters. (Enhanced version only)

Michael: "She's my daughter, I'll handle it."
Trevor: "Judging by past behavior, and the state of the rest of your family, fuck only knows what that means."
―Michael and Trevor on the way to the Arena.

Fame or Shame is a mission in Grand Theft Auto V which protagonist Michael De Santa performs with the help of Trevor Philips at his mansion in Rockford Hills, Los Santos, San Andreas. The mission can be triggered by either Michael (triggered automatically by switching to him) or Trevor (By manually going to Michael's House).

At the De Santa household, Michael is making himself a drink and finds a marijuana bag belonging to Jimmy in the fridge. At that point, Amanda enters and, believing the drugs to be Michael's, begins arguing with Michael about the state of their family. Fabien appears to greet Amanda, before Jimmy appears looking for his drugs. Michael confronts Jimmy, which leads to another argument. The tension is broken by the arrival of Trevor Philips, which shocks everyone, especially Michael, who believed Trevor to be dead.

Michael and Trevor emerge to find their car towed away, so they hijack a Phantom to chase Lazlow who attempts to escape in his red Dilettante. Michael and Trevor follow Lazlow through Los Santos, eventually cornering him when his car's fuel runs out in the Los Santos Storm Drain. Trevor forces Lazlow to dance without his pants on and warns him not to touch Tracey again. Lazlow agrees and runs away. Afterwards, Michael and Trevor part ways. Michael calls Dave Norton while Trevor drives away in the Phantom that they hijacked earlier. Dave tells Michael to meet him at the Galileo Observatory as soon as possible.

"Panic turned to chaos to bedlam as an argument broke out between outspoken Fame or Shame host Lazlow and the relative of a contestant who was auditioning. It is believed the fight began when the father of a contestant objected to his daughter's appearance on the show and chased the host from the scene. Onlookers were traumatized. This is further worry for Fame or Shame, which has been dipping in the ratings recently."

"An attack on the set of Fame or Shame has its host fleeing the scene. Some people don't take rejection well; According to eyewitnesses at the Fame or Shame auditions at Maze Bank Arena, that's exactly what happened when the relatives of one aspiring singer attacked Lazlow, the host of the show, who was chased from the scene. A call to Lazlow's agent was not returned." 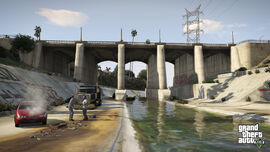 A pre-release screenshot of the mission.

Michael and Amanda bicker with each other.

Michael confronts Jimmy about his weed.

"Did somebody say yoga?"

Michael and Trevor stare down each other.

Go to the Maze Bank Arena.

Arriving at the arena.

Knocking out the event coordinator.

Hurrying into the arena.

Trevor puts an arena employee into a chokehold.

Michael and Trevor make their way into the auditioning room.

Lazlow introduces Tracey to the cameras.

Tracey beginning to perform her dance.

Michael and Trevor give chase to Lazlow.

"You pissed off the wrong hillbilly now, Lazlow."

Chasing Lazlow throughout the city.

Lazlow's car comes to a halt.

"Now I want you to dance sexy, celebrity..."

Michael orders Lazlow to run off before he changes his mind.

Michael makes a call to Dave as he and Trevor part ways. 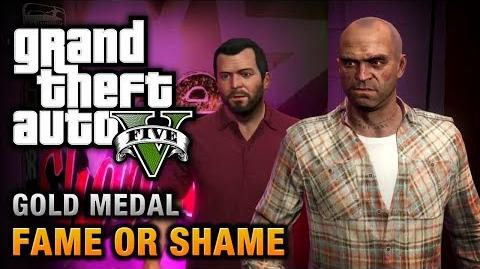 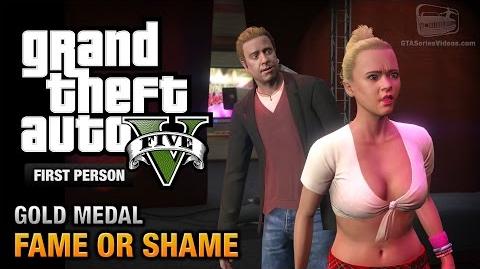 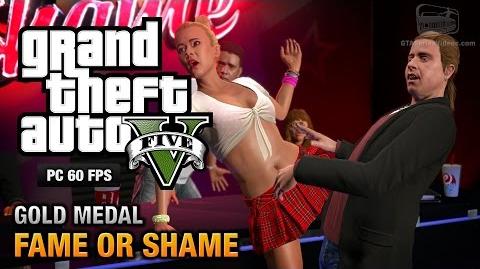