The show is filmed in the Vinewood Bowl in Vinewood Hills, and auditions are held in the Maze Bank Arena in La Puerta, Los Santos. As of the events of Grand Theft Auto V, Fame or Shame is in its 14th season.

The judges on Fame or Shame tend to mock and insult Lazlow even when voting on a singer's performance. The show's ratings are apparently low, so Lazlow begs the judges to do something controversial, as real-life talent shows do to keep acts despite low ratings.

Fame or Shame is likely a parody of talent shows such as The X Factor, The Voice, Fame Academy, Britain's Got Talent, Strictly Come Dancing, American Idol, and America's Got Talent, where three or more judges vote on the contestant's performance. In addition, the opening sequence of Fame or Shame is very similar to that of The X Factor, which involves a beam of light doing a fly-through of the city.

The show can be viewed by any protagonists on Weazel and the show's official website, fameorshame.net. It is also notably the only TV show with the episodes updating as the story progresses.

Season 14 – The Semifinals (viewable after Franklin and Lamar)

An episode focused solely on William Angio's act—the cover of Jezz Torrent's 1991 song "This Is A Power Ballad". The performance is bashed by Imran and Anita, both of whom vote "Shame," although Hugh votes "Fame" after William tells the judges his sad backstory of coming to the show. William continues on to the finals even after being voted off, as his background story deemed to act positively on the show's declining ratings.

Season 14 – The Finals (viewable after Reuniting the Family)

The season finale, originally intended to sum up the acts of the season, Tracey De Santa's act—the performance of her personally written song "Daddy Issues" was added after Michael De Santa threatened Lazlow. When Tracey finishes her song, Lazlow displays blatant favoritism in an attempt to sway the vote. He also makes references to a man that will kill him if Tracey didn't get chosen. Three Masturbating Monkeys, an act previously featured on the show, gets the final prize of $1,000,000 (paid in 26 biannual installments) instead, much to Lazlow's disgust. Lazlow and Hugh get into a fight as Anita and Imran close out the season.

Hugh Harrison: A supposedly British judge and an obvious parody of judges like Simon Cowell and Craig Revel Horwood, complete with degrading comments which are usually aimed at Lazlow. A montage shows Hugh comparing bad acts to Lazlow and even assaulting and urinating on him.

Anita Mendoza: The female judge who seems to be a parody of Paula Abdul who approves of Hugh's insults at Lazlow and considers it British humor. Anita mentions that Lazlow slept with an overweight woman in exchange for putting her through to the finals. Lazlow initially denies this before later confirming it.

Imran Shinowa: The third judge member who also hates Lazlow. He actually spends more time advertising commercial products rather than judging the performances of the participants, and usually plays a smaller role in the show than Hugh and Anita.

The Fame or Shame studio in the Maze Bank Arena.

The editing room in the studio.

The recreational area in the studio. 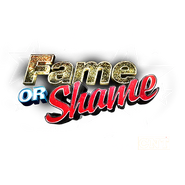 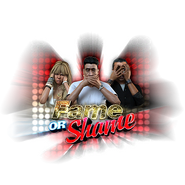 Fame or Shame No Evil Tee, featuring the judges from the show, acting like the Three Wise Monkeys. 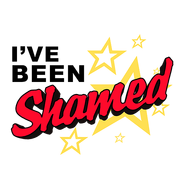 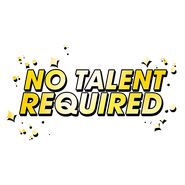 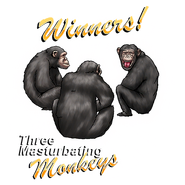 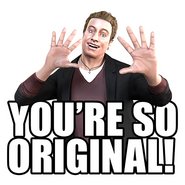 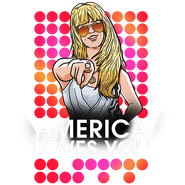 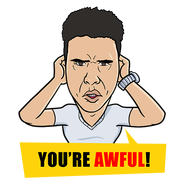 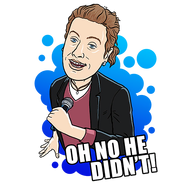 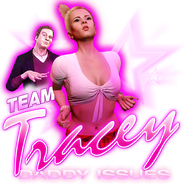