In-game time
“You get used to bad press in this business, but there's bad press and there's a personal hit piece running in the main segment on Weazel News. By the time everyone realizes it's bullshit, no one will care. So I need the reporter to get some firsthand experience of the random acts of criminality he loves to write about. I've sent you some probable locations, watch out for a white news van.”
— Agatha Baker's briefing.
“What the hell happened to professional journalism in this country? Every day I get some hack threatening me with a fake news hit-piece on the casino. Well guess what, I finally snapped. I'd like this asshole from Weazel News to become one of his own statistics. He drives a white news van, I'm sending some probable locations over now.”
— Alternative briefing.

Fake News is a Casino Work mission featured in Grand Theft Auto Online as part of the The Diamond Casino & Resort update. It is a freeroam mission given to the player by Agatha Baker.

Ms. Baker informs the protagonist of fake news spreading about the casino and that she wants the Weazel News reporter killed.

The player is given five semi-random possible locations around the city. The reporter, and his white news van, will be located at one of these, while dark grey Rumpos will be parked at the other locations. Once the white van is found, the player needs to tail it until the reporter parks and exits his vehicle.

“Are you on his tail yet? Wait till he's on foot and somewhere quiet. Don't use a gun. We need this to look like a mugging gone wrong, so don't forget to take his wallet. I am so fucking excited.”
— Ms. Baker 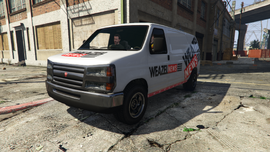 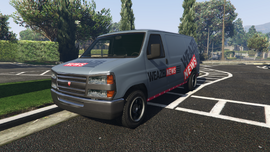 All other vans will be grey.