Standard White - 100%
“The modern urban thug doesn't need fat tires, massive cylinders and reinforced bodywork to make the streets his kingdom. Welcome to a world where the only ride you need has recycled plastic panels, the wheels off a shopping cart and the same engine as your refrigerator. And trust us, when your crew rolls into town that deafening high-pitched whine will strike fear and lust into the hearts of your enemies.”

The Faggio takes the appearance of a modern urban scooter, resembling a cross between a 2000-present Piaggio Zip and a 2007 Peugeot V Clic, while sharing minor styling elements with the Kymco Agility 50 compact scooter.

The Faggio assumes a newer design compared to its previous iteration, where the front section has a small fender with additional covering on part of the small forks. The tall panel extends slightly forward and houses a triangle-shaped headlamp on the front, while the upper side holds a small fairing with the corresponding turn blinkers, handlebars, rear-view mirrors and the dial panel. The middle section has an upswept shape, and a plastic finish covers the area behind the tall panel and the floormat, the latter having linear detail.

The rear section mostly consists of a small curved body, which houses a small black seat with room for two occupants and two small foot pegs for the passenger. The rear end has a small luggage rack directly connected to the rear portion of the seat, a single red tail lamp on the end of the curved body, and a black section below it, which holds the number plate, the turn blinkers, and a single red reflector on the lower side. Below the rear section, there is the corresponding swing-arm holding the rear wheel, a single red suspension spring on the left, and the exhaust tube on the right. A black mudguard also covers the upper side of the wheel.

The vehicle features "FAGGIO" and "City-XS" badges around it, together with coloured dots representing the Italian flag (possibly a nod to the real-life manufacturer Piaggio). It spawns in a variety of single-tone or two-tone colours, where the primary one is applied on the body and the front mudguard, while the secondary one is applied on part of the tall section, part of the fairing, the outer portions of the middle section, and the portion below the seat. It uses small five-spoke rims wrapped in small-profile tyres.

Returning to Grand Theft Auto Online, the Faggio Sport retains the same design and features, although it receives a different set of badges, being alternate "FAGGIO" badges without the Italian-themed coloured dots, and the "City-XS" badges replaced by "Pegassi" badges. The suspension spring also receives a chromed finish. The instrument panel also receives a single analog dial, which is also used on the classic Faggio and chopper bikes, such as the Bagger and the Police Bike.

Colour distribution is the same as in GTA IV, where the primary one is applied on the body and the front mudguard, while the secondary one is applied on part of the tall section, part of the fairing, the outer portions of the middle section and the portion below the seat. It uses the same small five-spoke rims wrapped in small-profile tyres, albeit with updated tread pattern.

As a modern street scooter, the Faggio has a powerful single-cylinder engine with an electric-like sound, coupled to a continuously variable transmission drivetrain (despite shifting gears). The Faggio is, unexpectedly, the easiest vehicle to use when performing long wheelies, possibly due to its high centre of gravity and short wheelbase compared to other motorbikes. When at top speed, the Faggio can slowly outrun any heavy motorcycles, particularly choppers such as the Zombie, the Freeway or the Hellfury.

The bike retains its single-cylinder engine with the same electric-like sound from GTA IV, again coupled to a CVT drivetrain (despite shifting gears). The vehicle is similar in performance to the Faggio Mod, having an increased top speed and much more agile handling than in GTA IV. However, it cannot perform wheelies as before. 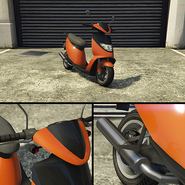 The Faggio Sport on the Rockstar Games Social Club.

The Faggio Sport on the updated Rockstar Games Social Club.

The Faggio Sport in the cinematic preview on Rockstar Games Social Club. 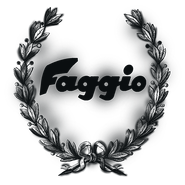 The Faggio logo on the graphic of the Faggio Tattoo. 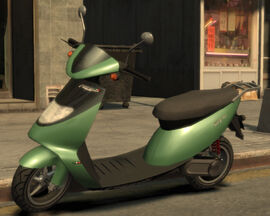 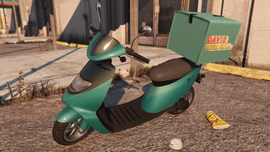 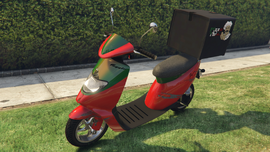