Standard White - 100%
“A certain kind of man looks at a scooter and thinks "it's fine, but it doesn't reflect how unique I am - it needs some interesting mod options". If that's you (it is) then don't fret, your minute-long search has finally come to an end.”
— Southern San Andreas Super Autos description.

The Pegassi Faggio Mod is a scooter featured in Grand Theft Auto Online as part of the Bikers update.

The vehicle is essentially a variant of the Faggio, which has access to an array of visual modifications. The vehicle shares the same body and most of the features from the regular version, but the front fender has chrome frames added around it. The tall panel also now has a chrome rack with a top-mounted, non-functional lamp, while the upper side of the panel has an updated handlebar design comparable to the motorbikes added in the same update, housing a functional headlamp and a rear-facing analog dial similar to bikes such as the Bagger and the Police Bike. The middle section and floormat are largely identical to the ones from the regular Faggio.

The rear section is largely identical to the regular Faggio, but the seat is finished in black leather and lacks the zebra pattern, although it can be added as a modification in Los Santos Customs or Beeker's Garage. The lower portions also have chrome frames around.

Colour distribution is different to the regular Faggio, as the primary one is applied on the front fender and the body, while the secondary one is applied on the front portion of the tall panel, excluding the protruding centre. It uses the same wheel design as the regular version, being plain rims with rivet details around, wrapped in medium-profile tyres.

The Faggio Mod shares the same single-cylinder engine and the 3-speed gearbox as the regular Faggio, but it produces a loud two-stroke noise similar to the 3D Universe iterations of the aforementioned vehicle, which can be also heard loudly crackling even at idle or when decelerating. The vehicle has a much increased top speed and much more agile handling than the regular version, resulting in a more desirable choice for cruising around. However, it is very easily outclassed by most bikes in races.

Installing any "Front Antenna" modification will increase its traction slightly, in the same way as a spoiler. 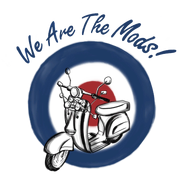 "We Are The Mods!" Faggio tattoo design in Grand Theft Auto Online. 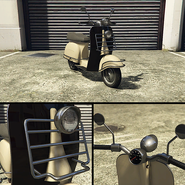 The Faggio Mod on the Rockstar Games Social Club.

The Faggio Mod on the updated Rockstar Games Social Club.

The Faggio Mod in the cinematic preview on Rockstar Games Social Club.