The Faggio's appearance remained virtually unchanged between GTA Vice City to GTA Vice City Stories, being based off a 1970s-1980s Piaggio Vespa, apart from one of its brake lights being broken on the San Andreas model. 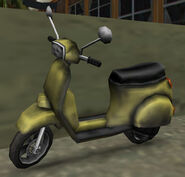 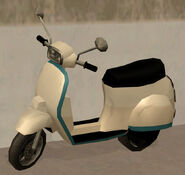 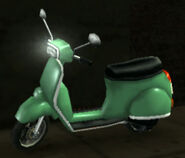 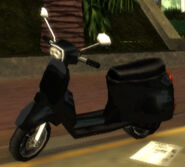 In GTA IV, the Pegassi Faggio City-XS took on the appearance of a modern scooter, possibly a 2000-present Piaggio Zip or a 2007 Peugeot V Clic with the headlight and name from a CPI Oliver City.

In The Ballad of Gay Tony and GTA V, the "Second Generation" is present as well as a more classical version (called Faggio Ultra in the beta) reminiscent of the original Vespa, but features exotic seat covers in purple velvet, or with leopard or zebra skin patterns. 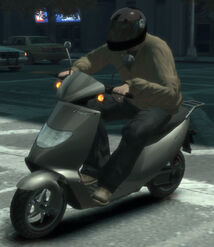 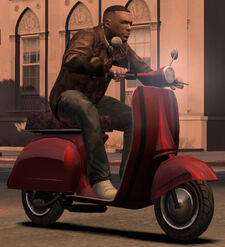 Grand Theft Auto V
Add a photo to this gallery

The Faggio is the slowest motorcycle in each of the four games in which the vehicle appears, but makes up for this with its excellent maneuverability, acceleration, and light weight.

The Faggio has a new engine sound, no longer has a single transmission number, and its handling has been greatly changed, yet it is still the slowest motorbike in the game. Using the Faggio is the easiest way to do long wheelies.

The Pizza Boy (or Pizzaboy) delivery scooter, featured in GTA Vice City, GTA San Andreas and GTA Liberty City Stories, is a modified Faggio with a back-mounted box installed to carry pizzas (or other goods), and painted in the livery of the vehicle's respective owners. Another delivery scooter, the NoodleBoy from GTA Liberty City Stories, has similar handling and speed to the Faggio, but has a different, more contemporary design. In GTA Vice City Stories, there is another delivery moped looking like the Faggio called the Ventoso; which has a higher top speed and acceleration than the Faggio.

In GTA IV, a Faggio is requested in Stevie's Car Thefts, appearing in a unique light green paintjob. As a new Faggio will spawn in the same spot until the player delivers it, the player can keep one and deliver the other to Stevie.

Retrieved from "https://gta.fandom.com/wiki/Faggio?oldid=555687"
Community content is available under CC-BY-SA unless otherwise noted.