“No one puts together a sprawling underground facility quite like the IAA, and no one else is quite as willing to sell it via Maze Bank Foreclosures for a quick injection of liquidity.”
— Online loading screen description.

Facilities are huge multilevel underground facilities operated by the IAA. They may be customized with several additions, similar to Bunkers, Motorcycle Clubhouses and CEO Offices.

There are 9 Facilities available to purchase from Maze Bank Foreclosures after receiving an introductory phone call from Lester Crest.

Go to foreclosures.maze-bank.com to purchase a Facility. This property gives you access to The Doomsday Heist planning room as a VIP, CEO or MC President.
“Hey, uhh, I know we've got that other thing... you're still working on that, right? Right, great...
Okay, well I've got something else. Something so big and so secret, we've gotta hide it under a thousand tonnes of reinforced concrete.
Buy an ex-government facility on Maze Bank and I'll meet you over there.
This'll make any bank job we could pull look like small fry.
”
— Lester
Visit the (teal 'H' here) near Lester's house at any time and he'll call you again with details of the job.

In a similar manner to Bunkers and Hangars, facilities can be purchased for use both by Organizations and Motorcycle Clubs however there is no on-going business operation within that requires the player to register as a CEO, Biker President or VIP other than the actual Heist missions. If the player is in a crew, the crew logo will be prominently displayed on walls and the floor throughout the Facility. A new Interaction Menu Facility Management function allows the player to turn the logo display on or off, invite other players or turn the Heist Planning Screen on or off.

An intercom plays regular announcements indicating the ongoing IAA occupation of the facility.

After completing acts of The Doomsday Heist, memorabilia from said Heist will crop up around the facility:

The player enters the facility via a large oval elevator from the surface. Entering the corona on foot or with a vehicle or flying an approach and selecting the option to enter will trigger a small cutscene showing the surface platform splitting into two doors which swing upwards and reveal the elevator platform which descends into the structure. If the player is entering on foot, the cutscene will include them entering a PIN on the keypad controls for the elevator. During the entrance cutscene, the exterior of the Facility shows the style the player has chosen.

Once underground, players appear in a large oval room containing the garage storage areas. The level (designated -3) contains storage for large weaponized vehicles including the Avenger. The Weaponized Vehicle Workshop with the Weapon Mechanic is found at one end. A small keypad terminal with a yellow corona is used to return to the surface on foot. Ramps and stairs lead up to the mezzanine level that runs around the outside edge of the oval room. A blue corona in the workshop provides the vehicle management menu to rearrange the stored vehicles. A walkway is visible on a third level but it is inaccessible.

From level -3, a walkway at the opposite end to the workshop is manned by an armed guard and leads to the security area.

A walk-through metal detector branded and operated by Gruppe Sechs must be passed through (with an audible buzz). A security guard can be seen typing at one dual-screen computer and another unattended computer is next to him. A small glass-walled office on the right contains a guard manning another computer and there is a re-spawning Minigun with 500 rounds that spawns on the counter and can be picked up from inside the office for free reloads.

If the optional Security Room upgrade was purchased, the entry is on the left directly opposite the Minigun.

Inside the Security Room is a central table with 5 further weapon pickups that re-spawn every 5 minutes:

There is a single security staff member operating a CCTV terminal. The player can take over control and view and control the 13 available camera positions (even though there are only 12 monitors on the desk).

A gun locker is on the far wall and performs the same function as those found in Bunkers, Clubhouses and Offices, allowing the player to assign a custom subset of owned weapons to be carried around.

The Strike Team terminal is located on the desk looking out into the hallway. This allows the player to call 3 levels of mercenary strike on other players.

Next is a large L-Shaped reception desk staffed by a male and a female Facility Receptionist. These receptionists operate similarly to the Assistant in an office and will provide free snacks and access to Pegasus Concierge Services to leave the Facility in a helicopter, with a small fee of $200 - $5,000 (depending of the aircraft).

Walkways are accessible behind the reception desk and overlook the office areas below. Three stairways lead down to the lower level. The fire doors on the opposite side of the stairways are inaccessible to the player.

Continuing along the main lobby corridor from reception leads past the sleeping quarters to another lobby.

A door on the left leads to the sleeping quarters (if purchased). This provides the player with a spawn location option to allow them to start a session inside the facility.

The lounge is a rectangular room with seating and a working Internet accessible iFruit computer and can be upgraded to include a wall-mounted TV. Once installed in the Lounge, the privacy glass feature can be turned on or off using the control panel located to the left of the main door when standing in the Lounge. By default, the privacy feature is disabled but can be toggled on or off as desired.

Downstairs from the lobby and gantry, there is a large office space with 8 desks with triple monitor computer displays. Breakout space is directly beneath the lounge with operational Vending Machines and tables and seats which is then followed by a second office space with a further 4 desks. IAA agents both male and female can only spawn when there isn't an active heist, with the exception of two periodically spawn near the vending machine.

At the far end of the office space on two levels are computer server towers which are attended by multiple NPCs in white lab coats, all wearing generic doctor ID badges from St. Rytkonen University Medical Center claiming to be "James Smith" Attending Physician.

If the Orbital Cannon is purchased, the server towers are visually updated to be twice as tall with a much cleaner design.

Back upstairs, the final accessible room in the facility is the Heist Planning Room where Lester Crest introduces the player to Avon Hertz and Cliffford to set in motion the events of The Doomsday Heist itself. Players can access this room to play through the heists and return to replay any of them later.

Owning a facility will incur a standard daily fee of $500, plus a $50 Garage Mechanic fee. Opting for the Security Room and Orbital Cannon will cost the maximum fee of $1,050 daily. 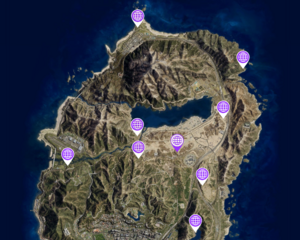 * Set by default on the initial purchase. Only charges when switching back during the renovation.
?The Facility Graphics will also affect the facility windows' pattern, and the wall's graphic inside the Lounge. 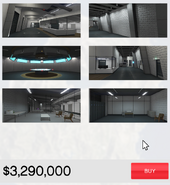 Exterior from the air.

Top level of the garage showing an exit corridor (inaccessible).

Minigun in the small office.

Upper walkways over the office.

Internet accessible iFruit in the Lounge

Military will appear outside the player-owned Facility upon completion of the Doomsday Heist. 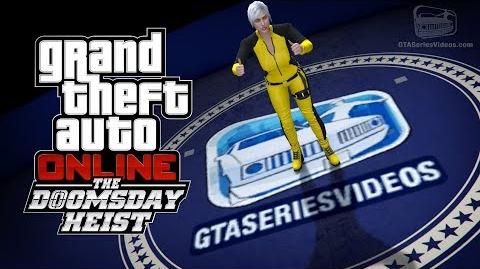 A non-purchasable IAA Facility is located under the Radio Telescope Array & appears in The Doomsday Heist Act I Finale, The Data Breaches. In this version, the garage area is not present, being replaced by the entrance elevator, directly beside the security scanner. There is another elevator inside this facility which presumably is normally used to access the lower levels.

At the opposite end of this Facility, the Heist Planning Room is replaced with a hallway that leads the players further inside the premises. This section is not accessible in any player-owned Facility. Along the hallway, there are several rooms & internal stairwells leading down through level -2. A Server Room is located on the floor below (level -3) and is only accessible via an internal stairwell at the end of level -2. A larger War Room in this version is located on level -2 & has four terminals which are used to remote-control exterior defence turrets. The turrets themselves have a dual set of a machine gun (similar to most remote guns) and an autocannon (similar to the Avenger's cannons).

Another non-purchasable IAA facility is located under their headquarters, which appears in The Agency Deal finale. This one is mostly identical to the previous one and shares the same interior, but the access point is from an alternative entrance located near the construction site of the Pillbox North Station. This entrance leads the player to the Server Room on Level -3, and they must reach the interrogation room on Level -2, where the dealer is held. The War Room and Level -1 are inaccessible in this mission, although the stairs leading to Level -1 are still accessible.