Facade (Stylized as FACADE, pronounced "fasad") is a computer software and hardware company in the HD Universe. The player can buy stocks from them on the Bawsaq.com website in Grand Theft Auto V.

In GTA IV one of their products, "Wing It", is advertised on the in-game radio and on billboards.

In GTA V, they have a slightly larger role and are featured on the BAWSAQ. The company is likely based on Microsoft due to both companies being in the computer applications industry featuring four squares in their logo, and a mobile OS user interface design similar to that of Windows' "Metro" UI. Also, the design of Facade's computer operating system bears a strong resemblance to Windows 7, with similar icons and a theme similar to that of Windows Aero. The background resembles the default Windows Vista background. The logo also resembles the logo used for the Nintendo 64 game console. The mobile OS version is based on the Windows Phone.

Lester Crest owns a Facade laptop as seen in The Doomsday Heist in Grand Theft Auto Online. His laptop appears to be a gaming laptop based on Alienware laptops, evidenced by the glowing Facade logo and the also-glowing trefoil surrounding it on the back. The laptop also sports a Hacker sticker which is based on the Facade logo.

Agent 14 owns a Facade laptop as seen in The Doomsday Heist. This laptop appears to be based on a Dell XPS 13. It has a Facade operating system similar to Windows 10

The cloud operation system demonstrated in the Doomsday Heist is made by Facade.

They also have a video game division, Facade Game Studios. Titles produced by them include Fairy III, Watersports & Mudslides, and Cannibals II.

In the mission The Vice Assassination, Franklin must assassinate Facade's Head of Product Development, Jackson Skinner. After Lester discovers Skinner's illegal transactions, he orders Franklin to kill him while he is picking a prostitute. Jackson's death causes a major drop in Facade's stocks.

After completing The Vice Assassination, invest all the money from all the three protagonists in Facade's stocks, wait 2-3 days until the stocks return to the pre-mission price and sell everything.

Lester Crest's computer, running FACADE as the OS. Note the "GayPorn" and "Hacking" folders on the desktop. The date is also set to 2012.

A Facade desktop with the Wing It word processing application running.

Trevor's Facade phone as seen on the Social Club page.

The Facade phone in first-person.

A Facade keyboard in GTA V. Notice that a Windows logo can be seen on the keyboard. 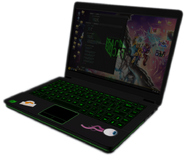 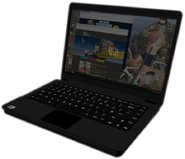