Michael Giese
“Did somebody say Yoga?”

As stated on his website, Fabien grew up in a small town in France. Later, in 1999, he moved to San Fierro, where he "knew he'd fit in". However, he was charged with crimes that were never proven, so he ended up moving to Los Santos. Fabien suffered through personal crises and poor decisions, which he managed to save himself by doing yoga in 2002. At the beginning of 2009, he learned various different yoga techniques, including how to feed himself individual blades of grass with his toes.

Fabien LaRouche is Amanda De Santa's private Yoga instructor. Due to Fabien's sexually-oriented methods, her husband Michael often shows disapproval towards Fabien for "messing around" with his wife, but Amanda claims Fabien is just a "close friend".

His first appearance is in the mission Fame or Shame, where he makes his entrance with his catchphrase: "Did Someone Say Yoga?" Fabien tries to calm down Michael after he had yet another fight with Amanda, but he is interrupted by Trevor Philips' sudden re-appearance. The atmosphere of Trevor's presence is able to make even Fabien, who is normally always calm and serene, feel nervous around him.

He later appears again in the mission Did Somebody Say Yoga?, where he convinces Michael to join him and Amanda in a yoga session in the backyard. The session was progressing well until Fabien attempted to perform a sexual pose behind Amanda. Michael became enraged at this and lunged at Fabien, who dodged out of the way, causing Michael to fall into his swimming pool. This was the final straw for Amanda, who left Michael and moved in with Fabien, taking Jimmy and Tracey with her.

Whilst living with Fabien, Amanda, Jimmy and Tracey post Lifeinvader updates about their new lives. At first, Amanda has only compliments about Fabien, saying how he values her inner and outer beauty, whereas Michael ignored her. However, as time goes on, Fabien starts to bother Amanda, leading her to comment that 'if he says "namaste" or "impacted" one more time [she] might scream'. Jimmy and Tracey, however, have never liked Fabien and both claim he is extremely annoying, with Tracey describing Fabien as "disgusting" in an e-mail to Michael.

During the mission Reuniting the Family, Jimmy, in the hope of bringing his dysfunctional family back together, returns home and reveals that Amanda and Fabien are hanging out at Bean Machine. Michael and Jimmy drive to the café, where Michael's attempts to politely settle things between him and Amanda are halted by Fabien insulting Michael and Jimmy. Tired of Fabien's ill-mannered behavior, Amanda tells Michael to hit him, with Michael obliging by knocking Fabien to the ground with another customer's laptop and Jimmy following up by kicking Fabien in the head. Following this, Amanda and Michael reunite and agree to try and salvage their marriage and family. Amanda leads Fabien to her car and drives off, while Michael and Jimmy drive off to collect Tracey. Fabien is not seen again, but posts on Bleeter following the mission.

Fabien appears to be very sexually obsessed, as all of the yoga positions he teaches have sexual connotations. This is evidenced by the images on his website www.fabienlaroucheyoga.com and his rule on palming: "If I gently palm your camel toe, accept the gift as it was intended." Because of this, and Amanda's previous affairs, Michael angrily equates these such yoga sessions with adultery. Both Amanda and Jimmy claim that Fabien has an anal sex fixation, and Tracey claims on Lifeinvader that Fabien once tried to seduce her by making her back into his pelvis after claiming her "energies are blocked". Later in the game, Fabien's snobbish, arrogant and highly uncouth behavior takes a toll on Michael's family. Because of this, Jimmy and Michael visit Fabien and Amanda, where Michael puts an end to their courtship.

Fabien LaRouche in an advertisement on the official GTA V website. 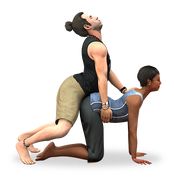 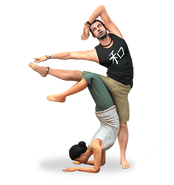 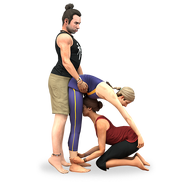 Fabien's smartphone app as seen in the kitchen of the De Santa house.