Yes
“You might think that calling something "utterly nondescript" and "profoundly unattractive" would be a contradiction in terms, but look closely: the FQ 2 is a masterclass in having things both ways.”
— Southern San Andreas Super Autos description.

The design of this car appears to be influenced by the North American styling found on the second generation Infiniti FX, sharing its iconic front fascia, grilles and lighting arrangement, as well as major inspiration from its greenhouse area, rear-side bumpers and front fenders.

The design of the car is mostly rounded, where the lower side of the front end features a large rectangular intake with five horizontal bars on the centre and two small mesh intakes on the outer edges. On the upper side, a large curved grille occupies the central portion, while the outer portions are occupied by black housings going upwards, featuring a set of circular lamps and two turn signals.

The sides of the car feature bulky front fenders and slightly flared rear arches. A concave detail can be seen from the front fenders and runs towards the rear handles, slightly becoming flat with the rest of the body. The greenhouse area features various black trims, namely the portion above the windscreen, the lines on the roof, the trims around the windows and the rear-view mirrors.

The rear end features a slightly protruding rear bumper housing the exhausts below. The boot area features a chrome line above the license plate and the corresponding badges. Its tail lights are located in black housings, which extend through the sides, towards close to the rear doors.

The car is prominently painted in a primary colour, while the arches and the lower portions are painted in a secondary colour. It shares the same rim design with the Minivan and the Asea, albeit larger and wrapped in high-profile tyres.

In the enhanced version of the game, the FQ 2 features a chrome line centralized onto the main front grille.

The FQ 2 has decent handling and sub-par acceleration, as to be expected. The suspension is more focused on comfort, however the FQ 2 is enjoyable to drive on a winding back-road, thanks to its nimble handling, nippy braking and moderate suspension, susceptible to many inclines, thanks to its coupled all wheel drive layout which also maintains speed whilst sustaining traction. The top speed is surprisingly better than a handful of other SUVs available.

The FQ 2's engine and AWD drivetrain works hard to propel it off the line, making the FQ 2 faster than other vehicles in its class. The potent engine is shared with various other cars, such as the Super Diamond, and makes the large FQ 2 feel peppy, and it has a lot more get up and go compared to other SUVs in its class. But brakes, on the other hand, are below average, often requiring a lot of room for the FQ 2 to come to a complete stop. Since the vehicle's handling is nimble and the the suspension is stiffer, the FQ 2 is a rather fun and exciting SUV to drive compared to other vehicles in its class, especially on winding roads. Crash deformation is ok, but could be slightly better. Other SUVs can take more abuse than the FQ 2, but its engine can take several direct blows before it erupts in flames.

While the engine cover reveals an apparent turbocharged V8, the in-game model underneath it is actually a turbocharged double-overhead camshaft Inline 4, laid longitudinally, in a front engine, all wheel drive configuration.

The FQ 2 in the original version.

The new grille in the enhanced version. 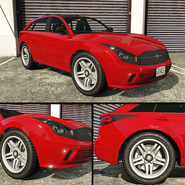 The FQ 2 on the updated Rockstar Games Social Club.

The FQ 2 in the cinematic preview on GTA V Rockstar Games Social Club.

The FQ 2 in the cinematic preview on GTA Online Rockstar Games Social Club.