“As the rate of infant heart disease suggests, the power to weight ratio has never been America's strong suit - until now. With the FMJ, Vapid put the American supercar on a raw food diet and gave it colonic irrigation. The result? With the same primal engine under bodywork that's 90% carbon fiber and 10% patriotic sentiment, this thing will go 0 to 60 on the back of nothing more than a light sneeze.”
— Legendary Motorsport description.

The Vapid FMJ is a two-door supercar featured in Grand Theft Auto Online as part of the Further Adventures in Finance and Felony update.

The FMJ takes a very futuristic appearance which is primarily intended to resemble the 2017 Ford GT. This is seen prominently in the side profiling, hood-scoops, rear quarter arches, and wheel rims. Also, the frontal fascia, headlamps, and grille are similar to the Aston Martin Vulcan. The rear portion design is a mix of 2017 GT and Ferrari 488 Pista.

The FMJ features a characteristic wedge-shaped profile, where the front end has a large carbon-fibre splitter, followed by a bumper lip with a large intake on the center. A set of modern headlights/LED strips can be seen on the outer edges, while the hood area features dual intakes and a manufacturer emblem.

The sides of the car feature thin exit vents on the front and large intakes on the rear, along with a set of carbon-fiber strips on the skirting area. The cabin area makes use of a curved windshield with grey A-pillars, colored rear-view mirror shells with grey supports and slanted upper fins connecting the rear fenders with the cabin, allowing to direct air flow towards the rear section. The engine bay area is narrower and features slatted vents, along with a rear glass pane over the engine.

On the rear, there is a large rear spoiler fitted with a brake light in the center and a concave center bearing the manufacturer emblem. The outer edges of the car feature a set of outer circular marker lights and inner C-shaped brake lights, the latter enclosing the exhaust pipes. The lower area consists of a license plate on the center and two large exit vents. The entire underside of the vehicle is carbon plated, with an open section for the gearbox/diff and an elevated section on the center of the rear end, acting as the diffuser.

The FMJ was the first car to use a dedicated interior, with a more compact dial cluster with the tachometer, speedometer, and fuel gauge unit. Air con units can be seen on each side of the dashboard and the central console, as well as silver/chrome details on the steering wheel and the radio console. The central section has what looks like a central armrest, with no signs of an apparent gear stick.

The primary color of the car is applied on the bodywork, while the secondary color is applied on the stock bumper lip, brake calipers and the interior stitching. It uses a set of dual five-spoke rims with black bolts around the center, wrapoed in low-profile tires.

The vehicle has excellent performance, with overall nippy handling, great traction, and a high top speed. The car's acceleration is very poor, being comparable to the Adder, but its turning radius and traction allow it to corner at unprecedentedly high speeds. The engine gives the car immense power to the rear wheels. The vehicle tends to spin out in a similar manner to the Reaper due to the weight of the engine distributed against the light body weight.

The FMJ is powered by a twin-cam V8 engine also found on cars like the Cheetah and the Turismo R, coupled to a 6-speed gearbox in a rear mid engine, rear wheel drive layout. The engine sound is the same as that found on the Entity XF, being a very high revving sound.

The green FMJ as seen in the Further Adventures in Finance and Felony trailer. 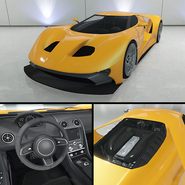 The FMJ on Legendary Motorsport.

The FMJ on the updated Rockstar Games Social Club

The FMJ in a cinematic preview on Rockstar Games Social Club

3 heavily modified variants of the FMJ may appear in Vehicle Cargo source missions. Each variant has a unique license plate number, colour combination and different set of bodywork modifications.