View source
watch 02:56
Raise a Floppa - The Loop
Do you like this video?
Play Sound
For other uses of the term FIB, see FIB

The FIB Buffalo is primarily based on the 2006-2010 Dodge Charger Police Package, while the front fascia has some subtle similarities to the 2005–2009 Ford Mustang. The vehicle is depicted as a black undercover vehicle with two sets of red/blue halogen police lights mounted on the grille and behind the rear window.

As with most police vehicles in GTA IV, the FIB Buffalo's computer system has full access to the LCPD Database, allowing the player to use the car for the Most Wanted and Vigilante side-missions. As with any other public safety vehicle, the player cannot listen to civilian radio stations, take the vehicle to a Pay 'n' Spray or Car Wash, or complete missions which involve meeting with criminals.

In both Grand Theft Auto IV and The Lost and Damned, it is one of the first Buffalo-based vehicles, just before The Ballad of Gay Tony separated it into a civilian and a police version.

In Grand Theft Auto V and Grand Theft Auto Online, the FIB Buffalo looks the same as in GTA IV, except that more interior emergency lights have been added to the front and rear of the car. As with the majority of police vehicles in the game, these lights are now LED strips rather than halogen incandescent lamps.

The FIB has been replaced by the Granger-based FIB vehicle as the FIB main vehicle.

The FIB Buffalo is a very well performing vehicle. Stylized as a sports muscle car, the vehicle can be said to have a high displacement engine, and the in-game engine model appears to be a rather basic 4-cylinder engine, laid longitudinally.

The car performs exceptionally well, as expected. It has a high rate of acceleration, which gives the car some amazing torque, and it also has acceptable traction, allowing this acceleration potential to be maximized. The top speed is one of the highest in the game, surpassing its civilian counterpart and equivalent LCPD vehicles, being on par with other high-performance police vehicles such as the NOOSE Cruiser and Police Stinger.

The car also features good armor, being invulnerable to high rates of gunfire, but not quite explosive-proof. The car, however, can be deformed with relative ease, which may be a disadvantage when involved in high-speed collisions. As the vehicle can take several good hits, it also improves on firearm attack.

The FIB Buffalo's smooth yet potent performance gives it a big-engined, supercharged feel. It sounds to have a flat-plane crank engine, being significantly smoother than its GTA IV counterpart, yet the engine model remains as a 4-cylinder engine. The top speed is relatively high, too, however the 5-speed gearbox may at times feel like it limits this somewhat. The Buffalo provides superb protection from firearm attacks or crash damage making it much durable. Thanks to RWD, the Buffalo may oversteer in some cases; in others, particularly in high-speed corners, the car neither understeers nor oversteers, and gives a balanced feel that differs from most American muscle cars. This car also rides exceptionally smoothly; when on bumpy/hilly roads, the soft-feeling suspension keeps the car level and at times bounces ever so slightly. For this, it is one of the fastest law enforcement vehicles. 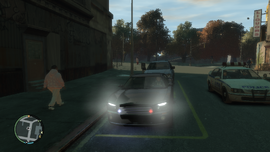 Niko in an FIB Buffalo.

Standard red and blue emergency lights at the front and rear of an FIB Buffalo in GTA IV.

An FIB with lights and sirens activated. (Rear quarter view)

A White FIB Buffalo as seen in the Meltdown film.

As it appears in Time To Get Away.

The FIB on the updated Rockstar Games Social Club.

The FIB in the cinematic preview on Rockstar Games Social Club.

While the vehicle appears in wanted levels, some missions has scripted appearances of it in GTA IV and episodes. Only in GTA V and GTA Online, its appearances are purely scripted.

Similar to the FBI vehicles from previous games, the FIB Buffalo is somewhat difficult to obtain, as it has no designated spawning locations, and only appears in certain missions or when the player has at least a 4-star wanted level. This is further made harder by the chance of the NOOSE coming after the player instead of the FIB. Getting the FIB Buffalo requires specific conditions to be met, making it a notable challenge:

Note that just gaining a 4 star wanted level alone for trespassing a restricted location, such as the Francis International Airport's runway or Civilization Committee Headquarters, will not improve the chances for an FIB Buffalo to appear in pursuit. The probability for it to appear in pursuit seems to increase if the player is making a rapid getaway from police cars, shooting the drivers, going over bridges and changing vehicles often.