Standard White - 100%
The Pegassi FCR 1000 Custom is a custom café racer featured in Grand Theft Auto Online as part of the Import/Export update, released on January 2nd, 2017, during the FCR 1000 Week event.

The FCR 1000 Custom is the custom variant of the FCR 1000, where it received several changes in terms of details. While the bike retains the general shape of the standard model, it has a front girder design and springer front end, with a different front mudguard, a single headlamp with no front fairing, and curved handlebars with no rear-view mirrors. Because of the front springers, the FCR 1000 Custom lacks any sort of dials unlike the standard version.

The body is mostly similar to the standard model, but the engine is fully finished in black and the protective frames are finished in chrome, as well as lacking the turning signals near the engine. The exhaust tube on the right side is mostly similar to the standard version, but the tube itself is a bit longer and the muffler is shorter and bent upwards.

The rear area remains identical to the standard model, but the street accessories behind the rear wheel are no longer present, deeming it illegal to drive on the road.

Colour distribution is similar to the standard model, where the primary one is applied on the front mudguard, lower part of the rigid forks, clamps, shock absorbers, fuel tank, rear section and seat stitching, while the secondary one is applied on the springed forks, upper part of the rigid forks and the handlebars. A trim colour is also available for the seat, which is always set to black. The rims are the same as the ones from the standard version, being similar to the "Wires" rims available in Los Santos Customs, although they are finished in black.

The performance of the vehicle can be described as average. While the bike has decent acceleration, top speed is below most sports bikes, possibly due to its relatively small engine. Its handling is good, but tends to understeer at high speeds, which may require use of the brakes when taking corners. The bike receives small upgrades in speed and acceleration, where the files list the bike as being 0.2 km/h faster than the regular FCR 1000. It is also 10 kilograms lighter than its basic model.

Again, the bike is powered by what looks like a flat-twin engine, coupled to a 6-speed gearbox. The engine sound is the same as the standard model, being a mid-revving, loud sound also shared with the Vortex and the Shotaro.

Installing any "Fairing" modification will increase its traction slightly, in the same way as a spoiler.

The FCR 1000 Custom on the updated Rockstar Games Social Club.

The FCR 1000 Custom in the cinematic preview on Rockstar Games Social Club. 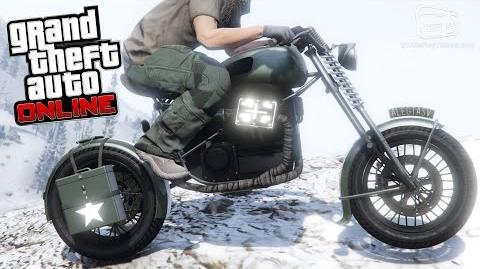