GTA Wiki
Register
Don't have an account?
Sign In
Advertisement
in: Pages with non-numeric formatnum arguments, Vehicles, Vehicles in The Ballad of Gay Tony,
and 9 more
English

TBOGT
“If this car could talk, it would say "I'm having a midlife crisis". Just cheaper than the divorce that'll result from having an affair with your personal assistant, but the two are by no means mutually exclusive.”
— Southern San Andreas Super Autos description

“A superfast luxury tourer in the European tradition, the F620 looks and feels as good on the open road as it does illegally parked outside known paparazzi haunts.”
— TBoGT Official website.
“Cat's eyes, dog's bollocks.”
— Billboard advertisement.

The Ocelot F620 in The Ballad of Gay Tony is a cross between the low to the ground, loud and outlandish Maserati GranTurismo, and the smoother Jaguar XK (X150). The front quarter vents of the F620 are also similar to those of the Mercedes-Benz SLR McLaren. The headlights resembles the one from the Maserati Quattroporte V. The body shape and cabin are almost identical to the Super GT, suggesting a connection between the two cars. In reality, both the Jaguar XK and Aston Martin DB9 were designed by Ian Callum and share visually similar features.

The F620 can be said to be an equivalent of the Dewbauchee Super GT, as both are similarly designed and even have the same interior. Although the car lacks badges, there are billboard advertisements of it with Ocelot as the manufacturer, suggesting it is the GTA rendition of Jaguar (since both names are species of cat).

The car is only available in a single colour. It also uses 7-spoke rims with ridges on the middle, wrapped in low-profile tyres.

In Grand Theft Auto V and Grand Theft Auto Online, the F620's design is largely the same as the TBoGT version, but its details have been changed. The separation of the grille and the bottom-left corner of the boot/trunk feature Ocelot badges, and its interior is more detailed, using the "Super GT" interior also found on other similar cars.

Again, the car is available in a single colour, although the interior stitching matches with the car's paintjob. It also sports an updated wheel design, featuring split five-spoke rims and new tire pattern, as well as red brake calipers instead of the orange calipers found on its previous iteration. 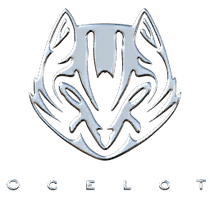 The F620 possesses a very high top speed and accelerates from 0-60 mph in under 5 seconds. The F620 is, however, prone to over-steer, with the back kicking out on sharper turns/looser road surfaces; but the suspension is low and firm, and the braking is very good. Overall, the F620 is an enjoyable and sporty vehicle to drive, and a decent choice for a getaway vehicle. The F620 has a modeled turbocharged twin-cam inline-4 engine.

The F620 uses the handling of the Super GT.

The F620 engine model depicts a turbocharged Inline-4 and provides reasonable power for its weight. Overall, the F620 has degraded performance than its GTA IV counterpart. While it lacks acceleration, the top speed is high for the class. The car feels relatively sporty, with decent response time, but a sub-par cornering radius. Over-steer is a minor but present issue with this car, and for the most part, is manageable. The brakes are slightly below average, but otherwise decent. Crash deformation is rather poor, and only a few hits are required for the engine to be disabled.

An advertisement of the F620. 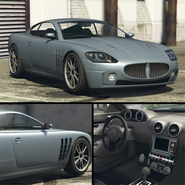 The F620 on the Rockstar Games Social Club.

The F620 on the updated Rockstar Games Social Club.

The F620 in the cinematic preview on the Grand Theft Auto V Rockstar Games Social Club.

The F620 in the cinematic preview on the Grand Theft Auto Online Rockstar Games Social Club.

The Epsilon Program own a unique baby-blue F620, which matches the rest of their custom-coloured vehicles. 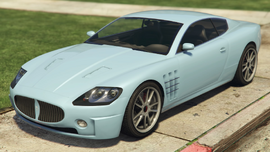