Eye in the Sky

Eye In The Sky

In-game time
“Franklin and Trevor locate a Z-Type for Devin.”
— Rockstar Games Social Club description.
“Right now, it is life lesson time, pal. You have got to wake up to what is real in this situation, bro. Take me, right? I am opportunity. I'm security. I'm fast cars and blowjobs. I got the world on a plate. Those two clowns...Oh, man, they are the worst kind of disaster that can ever come down. They are a full core meltdown, and you're just standing there, soaking up major radiation. You have got to take stock, man. Make that call, before it's too late.”
— Devin Weston.

Eye in the Sky is a mission in Grand Theft Auto V given to protagonists Franklin Clinton and Trevor Philips by Devin Weston.

The mission can be started as either Trevor or Franklin. If playing as Trevor, the player arrives at the Mission Row Police Station. Trevor enters the station and tells the desk sergeant that Weston sent him. The sergeant directs Trevor to the roof. There, Trevor boards a waiting Police Maverick. A Los Santos Police Department pilot flies Trevor to the FIB lot in the Murrieta Oil Field area where Franklin is waiting. Alternatively, if the player starts the mission as Franklin, Franklin is sitting in the lot when Trevor arrives in the Police Maverick.

The Police Maverick is equipped with a special camera, one that allows the camera's user to identify individuals by reading RFID transmitters placed in 2012 San Andreas driver licenses. Once Franklin and Trevor have spoken about the mission, the player is shifted to Trevor's perspective and takes control of the camera while the pilot flies the aircraft from the FIB lot into Downtown Los Santos. Trevor is looking for Chad Mulligan who has the Z-Type automobile Weston wants Franklin and Trevor to steal. The camera identifies four potential targets for Trevor to scan:

Since none of these are Mulligan, the pilot takes Trevor to a second area where six more targets are identified:

Mulligan is part of this group.

Once Mulligan has been found, Trevor surveys him to the garage where Mulligan is keeping the Z-Type, all the while updating Franklin on the target's location. Once in the Z-Type, Mulligan tries to escape. Trevor continues to track him using the camera. Eventually, Mulligan attempts to hide in a parking garage. Trevor switches the camera to thermal vision. Trevor first identifies Franklin's thermal signature. After that, Trevor points out other thermal images in the garage, each of which Franklin investigates (Franklin provides interesting commentary on each one). Mulligan is located to the far left of the garage.

At this point, the player is switched to Franklin, who is standing near the Z-Type and Mulligan. Franklin can choose whether to let Mulligan live or kill him: if Mulligan is spared, he will report the Z-Type as stolen and Franklin will get a two-star Wanted Level; if Mulligan is killed or simply just knocked out, the police are not notified. Franklin drives the Z-Type to a hanger in the Los Santos International Airport where Weston and Molly Schultz are waiting. Once there, Weston admires the car and remarks that only ten of them exist in the world. Franklin complains about his payment, but Weston assures him that he will receive it once the other two cars are acquired. He advises Franklin to start thinking about his own future and to stop affiliating himself with Michael and Trevor. Weston and Schultz enter a Shamal and prepare for takeoff, but not before Schultz tells Franklin to drive away from the airport using one of the two nearby Tailgaters. Franklin must then leave the airport grounds before the mission is completed.

The Z-Type is an incredibly expensive and rare vehicle that cannot be obtained in normal gameplay but through purchasing it at Legendary Motorsport for 10 million dollars. However, there is a way to obtain the car without having to purchase it. The player must drive the car to 3671 Whispymound Drive instead of driving it to Los Santos International after they have got it. They have to park the car in the garage, get out of it and let the garage door close with the Z-Type inside. Then, the player has to take the car out of the garage, exit it and abandon it, which will fail the mission. They must refuse to retry the mission and drive to the LSPD Auto Impound, where the Z-Type will be able to be retrieved for $250. [1]

If you deliver the Z type and then destroy Devin Weston's airplane it will cause the mission to fail and you will spawn in front of the airfield terminal with the Police Maverick parked across the street. However, it will be much easier to simply switch to Trevor after the mission is completed, who will sit in the Maverick.

Only if Chad is spared

"Los Santos record producer Chad Mulligan narrowly escaped with his life when his $3,000,000 Z-Type was stolen in a violent carjacking. The whereabouts of the rare vintage car, one of only ten still in existence and the identity of the assailant are still unknown."

Only if Chad is killed

"Los Santos record producer Chad Mulligan was killed and his $3,000,000 Z-Type was stolen in a violent carjacking in a Los Santos parking garage. The whereabouts of the rare vintage car, one of only ten still in existence and the identity of the killer are still unknown."

"The messy breakdown of fading record producer Chad Mulligan's marriage, which we're proud to have played such an integral part in bringing about, got a little messier today when his rare Truffade Z-Type was carjacked in a Los Santos parking garage. Mulligan told reporters that he was lucky to survive the violent attack and that he will definitely be thinking twice about buying a $3,000,000 car in the future. Was this a random robbery? Or was the assailant hired by Mulligan's wife to requisition the assets that he's trying to hide from the divorce settlement? I think we all know which is the more interesting story of the two, so that's the one we'll be reporting as fact over the coming weeks. Stay tuned."

(Only if Chad Mulligan is killed)

(Only if Chad Mulligan was spared)

Main article: Eye In The Sky/Soundtrack

Trevor arrives in the Police Maverick.

In the Police Maverick.

Scanning Franklin with the camera.

The block where the 3 targets are located.

Listening to a target's conversation.

Scanning the next set of targets one block further.

Chad reaches the garage with the Z-Type inside.

Upon opening the garage, Chad is confronted with Franklin wielding a gun.

Franklin demands Chad to hand over the car, but Chad flees with the car.

Z-Type fleeing through the streets at high speed...

...Causing mayhem within the city traffic.

Making his way down a backstreet in Burton.

A bus swerves out of control, missing the Z-Type and crashing into several cars.

Driving through another back street and into a parking lot.

The helicopter is lowered to allow Trevor to scan inside the parking lot.

Franklin is directed to heat sources, potentially Chad, by Trevor.

At the moment Chad is found, the helicopter once again rises.

Franklin finds the Z-Type and confronts Chad once more.

Driving out of the parking lot, Franklin calls Molly to inform her on the collection at the airport.

Deliver the car to the airport.

Drop off location on the map.

Chad reports the car as stolen, granting the player with a wanted level to lose before reaching the airport.

Driving through the checkpoint and approaching Devin's hangar.

Inside the hangar. Molly and Devin are found, along with their private jet and numerous other cars.

Devin approaches the Z-Type as Franklin gets out.

Devin is amazed, and tells Franklin just how rare the car is. 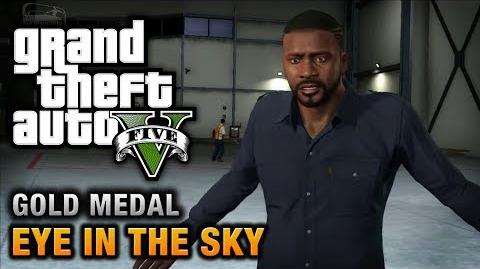 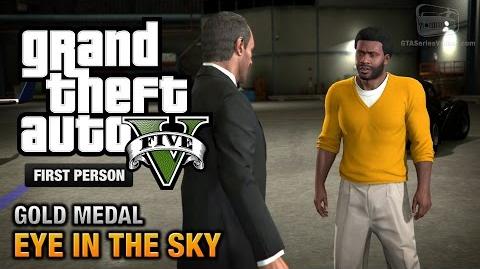 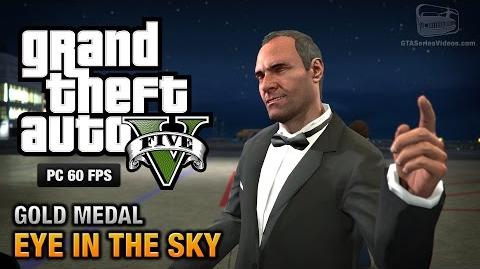