View source
watch 02:56
Raise a Floppa - The Loop
Do you like this video?
Play Sound
Not to be confused with Extraction, an Adversary Mode in GTA Online.

In-game time
“An old, old friend was arrested in Mexico a few weeks ago. Before we could do anything to help he was extradited to the States, and now they're holding him at Fort Zancudo Military Base. It's too late to save him, so we have to green light. I would expect the same. Military resistance will be enormous, but if you take him out, so will the reward.”
— Description

Extradition is a mission in Grand Theft Auto Online given to the player by Martin Madrazo. It is available for 1 to 6 players.

The team needs to go to Fort Zancudo and eliminate an informant. When the team arrives there, a plane will take off with the informant in it. The plane needs to be shot down. If the plane escapes, the mission will fail. Once the Titan is destroyed, the team will be informed by a message from Madrazo that the informant has already talked to the District Attorney and that the DA needs to be taken out before he reaches the Davis Sheriff's Station. He will be aggressively driving a black car from Route 68 to the Great Ocean Highway. If the DA reaches the police station, the mission will fail.

Once the DA is killed, his briefcase needs to be picked up. Any wanted level then needs to be evaded before the players can deliver it to Madrazo's house. This will complete the job.

Taking out the informant early.

Taking out the Titan.

The NPC model used in the Titan

The same NPC model used as the DA driving the Stretch. 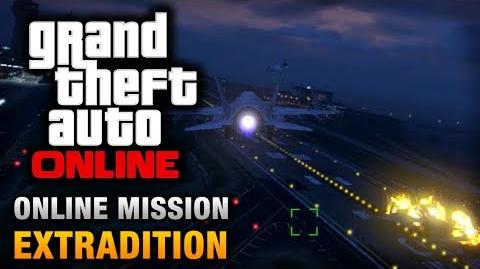