• ­Take the Anti-Aircraft Trailer to LSIA.

• ­Take the Anti-Aircraft Trailer to the hangar.

• ­Go to the second Dignitary's location.

• ­Escort the Dignitary to the helicopter.

• ­Go to the final Dignitary's location.

• ­Deliver the Anti-Aircraft Trailer to the drop off.

"Protect the nations's important allies/customers as they try to depart LSIA by private plane and helicopter. Turreted Trailers will be provided for the purpose, and should be returned."
―Description

Exit Strategy is a Mobile Operations mission featured in Grand Theft Auto Online as part of the Gunrunning update.

The team starts in a small parkway on La Puerta. Agent 14 orders them to take the Nightsharks with machine guns on it and one of the three Anti-Aircraft Trailers, one with a quad machine gun turret, other with six anti-air missile launchers and another with two Flak cannons.

With the equipment collected, Agent 14 briefs that there are important international allies and customers that need to leave the United States and the team have to help them. The team then moves to the Los Santos International Airport. Once inside the area, Agent 14 tells that they have to help the allies "before the assassins gets to them".

On the hangar, the first Dignitary gets out of the white Patriot and aboards to a white Velum 5-Seater. As the plane's engine starts, a 3-star wanted level is triggered and the enemies start to arrive. Two Buzzard Attack Choppers and a FIB car with FIB agents comes from the side of the entrance the team used. On the side of the southern runway, an FIB SUV attempts to intercept the plane and another Buzzard spawns on the northern side, but are quickly destroyed.

With the plane out of danger, Agent 14 gives the location of the second Dignitary and the team moves. On the way, another FIB car appears from the north and two more Buzzards spawns flying over the main buildings. The team encounters the Dignitary's Patriot and an FIB car ambushes it, but is destroyed. From the runway, more FIB cars and Police Cruisers (Interceptors) arrives to stop the Dignitary's SUV. On the way, a Police Maverick arrives and starts deploying NOOSE agents, but they are quickly taken out by the team's weapons. More Buzzards arrive from the northern side of the buildings and another FIB car blocks the path. As the Dignitary arrives to the white SuperVolito, another FIB car and Police Maverick arrives to take out the helicopter, as well as two Buzzards, but they are quickly destroyed. The team also have to destroy the Buzzards that will attempt to pursue the Dignitary's helicopter when it flies out of the airport.

With the helicopter safe, Agent 14 informs the location of the third and last Dignitary, where the plane is about to leave the hangar from the west side. As the plane moves, more Buzzards attempt to stop the plane, but the team manages to destroy them. Two FIB squads intercept from the southern runway, but they are not much of a problem if the team takes them out.

With the plane safe, Agent 14 informs that the last plane is safe and an international incident is avoided. Immediately, the team have to leave the area and bring the equipment back, while avoiding the pursuing police cars from the wanted level. Shortly after arriving to Cypress Flats, the police no longer pursues the team, so they can deliver the equipment with no problem. There will be agents waiting for the team with a Hauler and a trailer attached. With all the equipment delivered, the mission ends. 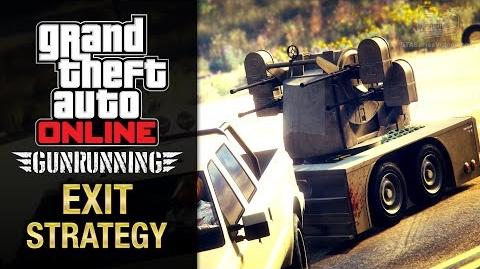 Retrieved from "https://gta.fandom.com/wiki/Exit_Strategy?oldid=1215493"
Community content is available under CC-BY-SA unless otherwise noted.