The avenue starts in the north at an intersection with Grummer Road in Northwood, and runs directly south, passing through the areas of East Holland and Middle Park.

Exeter Avenue terminates at the northern fringe of Middle Park, but does serve as part of Denver-Exeter Avenue - Denver Avenue merging with Exeter Avenue as it passes through the Star Junction region where it crosses paths with Burlesque. Unlike Denver Avenue, Exeter Avenue does not continue in its own name, partially due to the fact Algonquin island narrows in its southern half, however other smaller streets and passages take its place between Denver Avenue and Frankfort Avenue.

Its short span naturally means less landmarks are present, however it does look out onto Middle Park due to its area's height compared to the rest of Algonquin. The Northwood Fire Station is also found along the road. It also connects with Frankfort Avenue - being the only avenue to connect with another avenue (excluding the name-merged Denver-Exeter Avenue), where the Northwood Heights Bridge starts and crosses the Humboldt River. The Algonquin Inner Line (K/B)-Bohan Line (E/B) passes over the road as it crosses the Humboldt River parallel to the Northwood Heights Bridge, east-bound towards the San Quentin Avenue LTA (E/B on Bohan Line) and west-bound towards the Frankfort High LTA (K/B on Algonquin Inner Line).

The northern span of the road passes through the Northwood project apartments before it descends close to water level near the waterfront, connecting with Grummer Road.

The entire street is a 2-lane road flowing in both directions and connects to 6 streets, namely Grummer Road, and as 5 other streets of Algonquin's alphabetical system, including T, U, V and W and X, missing out A-S.

Exeter Avenue's placement as one of two avenues between Middle Park suggests it is based on Seventh Avenue in Manhattan, New York City. 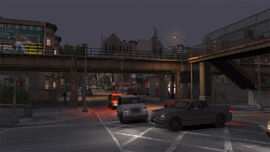 The street at night. 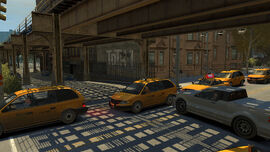 An alleyway opposite Northwood Fire Station, leading to Vespucci Circus. 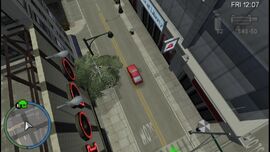 Retrieved from "https://gta.fandom.com/wiki/Exeter_Avenue?oldid=1145474"
Community content is available under CC-BY-SA unless otherwise noted.