supercar_6_eur_v8
“The British are well known for their superior auto manufacturing prowess. The company has provided cars for counts, Grand Prix, and doughy dignitaries across the UK.”
— Legendary Motorsport description.

The Exemplar heavily resembles the Aston Martin Rapide, with the front end derived from the Ferrari California.

The car is essentially a four-door version of the Rapid GT, and as such its design is remarkably similar, featuring a mixture of British and Italian design elements. One notable difference (beyond the additional set of doors and rear seats) is the exhausts, which are located underneath the rear of the car and are smaller than those on the Rapid GT.

The car is painted with a single colour for the body and the stitches found inside. Its stock wheels are similar to the "Supernova" SUV wheels available in Los Santos Customs, albeit slightly enlarged.

The car features a front-engine, rear wheel drive layout. The car is capable of providing great balance with cornering at low and high speeds. It is often considered to be the best racing car in the Coupes class. Its light weight and good weight distribution allow it to take corners quickly without spinning out or losing control. It is the best-handling of any four-door sedan in the game, over the Felon, Jackal, and Oracle.

The engine model seems to be loosely based on a V8, whereby it assumes a similar design to the Ferrari 360's F1310 DOHC V8 engine. Just like the Furore GT and Rapid GT (which also share this engine), it features two cold-air intake systems coming from the upper grille (ram-air intake) of the car.

The Exemplar on the updated Rockstar Games Social Club.

The Exemplar in the cinematic preview on the Grand Theft Auto V Rockstar Games Social Club.

The Exemplar in the cinematic preview on the Grand Theft Auto Online Rockstar Games Social Club. 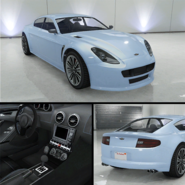 The Exemplar on Legendary Motorsport.