Standard White - 100%
“"I drove the Euros before it was cool." That's what you tell everyone as you drive your newly purchased Annis Euros, loudly reminiscing about the music you didn't listen to, the fashion you never wore, and the parties you didn't get invited to back in the aughts.”
— Legendary Motorsport description.

The Euros is a two-door sports car featured in Grand Theft Auto: San Andreas and Grand Theft Auto Online as part of the Los Santos Tuners update. It is manufactured by Annis in the HD Universe.

The Euros' styling cues clearly resemble the Nissan 300ZX (Z32), with the rear lights and bumper from the older Nissan 300ZX (Z31). The car may be modelled after the base model Nissan 300ZX that has a naturally-aspirated (NA) V6 engine. The name "Euros" may be a reference to Eunos, a former marque to Mazda.

The Euros is a sleek and contemporary Japanese sports car, appearing as one of the most modern vehicles at the time of the game's 1992 setting, featuring a wide intake and small fog lights with turn signals on the front, along with dual square lights above. The fuel cap can be seen on the rear left fender just near the door, while the cabin area features a panoramic sunroof (the only car with this feature). The rear of the car has a small lip spoiler, wide tail lights on either side, a central license plate on the bumper and dual exhaust pipes below. The vehicle spawns in a variety of single colors.

The Euros returns in Grand Theft Auto Online with a redesign, being manufactured by Annis. It is now based on the Nissan 370Z (Z34), with the front and rear bumpers, as well the side skirts, taking inspiration from the 2015-2020 Nismo models. The headlights, though the clusters are visibly inspired by the 370Z, the main shape were modeled after those on the 2011-2013 Infiniti G37 (CV36). The front central intake, as well the shape of the front side intakes, takes a reminiscent of the second generation Toyota GR86/Subaru BRZ (ZN8/ZD8). The main red tail lights are taken from the 2009-2015 Peugeot RCZ.

The vehicle bears many similarities with the ZR380 as they all share the same inspiration sources. The front of the car features a carbon-fiber splitter at the bottom and a large mesh intake on the center, along with smaller intakes with LED-like lights beside it and a black detail above the central one. On the upper area, the car has vertical housings with dual circular headlights and inner amber indicators, while the center bears the Annis emblem. The hood has two protruding lines that curve as they approach to the windshield, and opens to reveal the engine bay and a strut brace.

On the sides, the car has flat profiling on the wheel arches and small side skirts, as well as thin body lines passing through the doors and vertical handles with a discreet circular shape. The greenhouse area has black trim around the windows, black inner separations and large mirror wings with black supports near the A-pillars and silver horizontal details over them, along with triangle-shaped rear-quarter windows and a slanted hatch with a large rear window.

The rear of the car is very slanted, featuring the corresponding badges on the hatch/trunk lid and a dedicated section below, intended for the license plate. The sections beside the plate are occupied by large red tail lights with dual inner reverse/turning lights, while additional red strips can be seen below. The lower area of the bumper features thin vertical exit vents on the outer edges and a black section on the center with additional vents and moldings for the exhaust pipes.

The interior and dial set are shared from cars like the Coquette and the Blista Kanjo, with the former being a white/paintable variation of the one from the aforementioned cars. The Annis logo can be seen on the horn cap.

The primary color of the car is applied on the bodywork, while the secondary color is applied on the headlight casings, the skirts and the brake calipers. A trim color is also available for part of the doorcards and the inner portions of the seats, as well as a dial color. It uses a unique set of five-spoke rims with a triangular pattern on the end, wrapped in medium-profile tires. These rims can also support a dedicated color, although only naturally-generated examples from Content Creator may have one.

The Euros is a front-engined, all wheel drive car, with a 5-speed gearbox and a mass of 1,400 kgs.

The car is slightly on the heavy side, as it has a slow acceleration pace against some vehicles in its class, but a good top speed. Cornering ability is pretty good too, as it does not lose much of its traction upon corner entry and feels smooth and planted when pressing on the accelerator on corner exits, though it still has bouts of oversteer when turning too hard. Brakes are strong considering the weight, as it is able to stop the vehicle rather quickly into a corner despite the weight penalties it suffers. Despite that, the car is easy to control in drifting, being that it is easy to initiate using the handbrake and responsive enough to hold its angles.

The Euros also performs pretty well off-road too despite being rear wheel drive, as the weight keeps it planted to the ground when approaching a jump as it keeps it down to the ground instead of rotating or losing control of its own chassis upon mid-air, which makes it slightly better than the other vehicles from the same update like the Jester RR and ZR350.

The Euros is powered by a single-cam V6 engine, coupled to a 7-speed gearbox in a front-engine, rear wheel drive layout. It shares the high-revving sound from cars like the Jester, the ETR1 and the ZR380.

Being a conventional sports car, the Euros can only be modified to a limited extent at any TransFender garage. 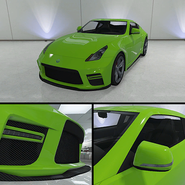 The Euros on Legendary Motorsport.

The Euros in the cinematic preview on GTA Online Rockstar Games Social Club.

Euros badge from the advert.

The Euros is considered one of the rarest vehicles in Grand Theft Auto: San Andreas, being seen on rare or special circumstances: